The Board of Directors announced last week they have hired Aron M. Martin to succeed the retiring Winslow at the end of the current school year. 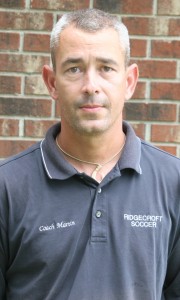 “We appreciate the numerous contributions Headmaster Elton Winslow has made during his tenure with the school,” read a statement released by Board Chairman Michael Harrell and Vice Chairman Johnny Jacobs. “We are confident that Mr. Martin will take the school’s strong foundation and carry Ridgecroft to new levels in the coming years.”

Martin, who currently serves as an administrator for the Gates County Schools, has been the soccer coach at Ridgecroft for six years. He said during that time he had grown to love and respect the school.

“I hold the school in such great esteem,” Martin said. “In my six years there as soccer coach, I have gotten to develop a relationship with the faculty, staff, parents and students. It’s really home to me in a lot of respects.”

Martin said he was excited about the challenge of leading a school with the history and tradition of Ridgecroft.

“I am not just looking forward to the challenge, but welcoming it,” he said. “I feel like I already have the support of the faculty, staff and board. When you have that, good things happen.

“I’m not saying I’m not going to make mistakes, because I am,” he said. “I want to hold those to a minimum and grow in the process.

“With Ridgecroft having the strong tradition it does, I am honored and humbled,” Martin added. “I’m coming in not with blinders on, but work gloves.”

Martin was chosen from among a number of highly qualified candidates both from North Carolina and out of state, according to the board statement.

Harrell said that among those qualified candidates, Martin distinguished himself. His philosophy on education, dedication to the well-being and development of students, leadership skills and the passion and commitment he communicated towards Ridgecroft’s continued growth and success were some of his major attributes.

Martin said he wanted to use his skills to be a solid leader for the school.

“I want to be a proactive, visible leader and, at the same time, include the staff on the decision-making process,” he said. “I don’t enter this thinking I know everything because I don’t.”

A graduate of Campbell University, Martin obtained the rank of Sergeant in the United States Marine Corps. He currently serves as Director for Open Gates Alternative School in Gates County.

Martin is scheduled to begin his new role at the end of the current school year as Winslow begins his retirement.

Cancer survivors walk the traditional first lap at the 2010 Bertie Relay for Life, held in May in Windsor. This... read more