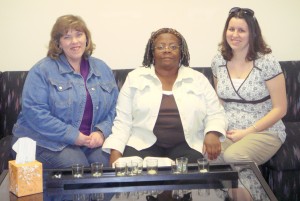 From left, Carol Hankinson, Diana Slade and Emily Truman serve as volunteers at the Freedom House in Sunbury. Photo by Tara Kinard

SUNBURY – It’s not what you think, or maybe it is.

Eric Earhart, pastor of The Upper Room Assembly’s Gatesville Worship and Children’s Center, would like to set the record straight, hoping the people of the county will better understand his mission.

In January of this year, The Upper Room Assembly expanded its reach into Sunbury. A one-year lease was taken out on what was formerly CandA Restaurant, a property located on NC 32.

The building, separated into two sections, serves two very different purposes with one common goal — helping others. On one side is The Great Dismal Swamp’s Gator Shack, a restaurant…the only restaurant, in Sunbury. It is staffed by volunteers from the church, and also by participants in the Freedom House…a 12-step rehabilitation program. Freedom House, which shares the building as the Gator Shack’s neighbor, serves as worship and rehab center, as well as a getaway for individuals looking to relax in a spiritual environment.

In theory, the arrangement seemed ideal. Through Freedom House the motive was to help individuals reach sobriety and achieve a greater life for themselves, then follow up by providing an employment opportunity through the restaurant, allowing them to gain communicative and interpersonal skills as well as independence, responsibility and wages.

Take the case of Steve. He was found by a neighbor of the old Sunbury School, sleeping on the school’s steps. Steve had found himself in Gates County after being devastated by a series of painful, unfortunate life experiences, including losing a son to suicide and being a methamphetamine addict. He is now sober, works at The Gator Shack, attends sobriety meetings and is active in the church.

Unfortunately, despite tremendous efforts, due to managerial shortcomings and the fiscal difficulty that has resulted, anything short of a miracle occurring may mean the end of this experimental combination.

“Realistically we did not have trained kitchen staff and the community just got annoyed at us and stopped coming,” said Earhart, who pointed out, “We’re preachers, not restaurateurs.”

The church would have already lost the ability to utilize their properties had it not been for a $16,000 donation, which will allow them to keep the lights, water, etc. on through January.

“It has been a financial failure, but a personal success because were helping people’s lives,” explained Earhart.

While the church’s intentions may have been positive, members of the community have perceived Sunbury’s new addition with a degree of hesitation and skepticism. Earhart contributes much of this to the fact that many are unaware of exactly what Freedom House is and how it is connected with the restaurant and, likewise, with the church.

Freedom House itself does not solely serve as a rehab facility, but is actually multi-functional. The aim, explains Earhart, was to turn it into a low-key church that would feel like you’re walking into a coffee shop.

“We’re trying to reach those who are alienated in terms of religiosity,” Earhart said, explaining that this group consist, typically, of young adults who may have little or no history of attending church, which could make the traditional worship setting feel uncomfortable or intimidating —“I don’t fit in, am I underdressed” — concerns of that nature.

The Freedom House’s inviting, relaxed environment, however, is meant to put these folks at ease by providing an atypical place of worship during the week, offering a small community room with couch, television, wireless internet, small café type tables, and great selection of books.  In the rear of the building is a small worship room to host services, as well as a gym area with exercise equipment.

“Our plan was to have a totally inconspicuous space to simply be available for the needs of the people,” said Earhart.

Despite fiscal hardship, the church has not yet given up on The Gator Shack or Freedom House’s mission or potential to positively impact the community.

“We will operate here until our lease is up or God keeps us open,” said Earhart. “We’re not giving up hope or faith, but are just out of money.”

The group, while realistic that an impending doom may be on the horizon, has also not counted out the possibility of a miracle.

“We’ll see about a miracle,” said Earhart. “We have certainly seen it happen before.”

In preparation for losing the restaurant, and in the spirit of helping others, the church has decided to have several food giveaways.

“Since we’ve got this until January 4, we’re going to use it to bless the people,” said Earhart.

The food giveaways will take place as follows:

Dec. 1: (After bible study) Trout dinner with french fries; and

The Nov. 29, Dec.1 and Dec. 8 dinners will take place at the Freedom House and available for those attending bible study at 7 p.m.

While the restaurant may be struggling, Freedom Houses’ rehabilitation program has been successful. Established in September, many individuals have found solace in the program and have managed to gain control over their afflictions.

“Hundreds of people have come through this and found the good Lord,” said Carol Anne Hankinson, Worship Arts Director.

The 12-step program, overseen by husband and wife, Jerry and Bert Hess, is based upon biblical principles and is not limited to alcohol and drug counseling, but any compulsive behavior from which people hope to break their addiction. Donations are welcome, but the program is free to the public.

“Our hope here,” said Hankinson, “is that by teaching people these steps and the biblical versus that go with them, they will be able to overcome their addiction.”

The rehabilitation program meets on Friday evenings from 7-9 p.m. In the event that the church loses the Freedom House, classes will continue to take place at the church in Gatesville.

If The Gator Shack ultimately fails as a business it will be shadowed by the multiple successful ventures implemented by the church. Two of their greatest successes have been Compassion Central, which consists of a clothing charity, and the Food Bank.

The clothing charity is geared toward members of the community who cannot afford clothing for themselves and their families are able to do get clothes free of charge. For those who are on a tight budget but in a position to “give a little” there is the option of paying $3 for a bag and whatever can be stuffed into it is what you take.

The food bank provides meals to those in need, free of charge. Last year the church gave out 92,000 pounds of food and while the numbers are not finalized for 2010 they are on pace to double that amount this year.

Both Compassion Central and the Food Bank are located in the building directly beside The Upper Assembly Church and are open from 10 a.m. until 2 p.m. on Monday, Wednesday and Friday.

Pastor Earhart has been an ordained minister for 10 years. He and his wife, Shari, have four children and are expecting their fifth at any moment.

For Earhart, this is not a job, it’s a mission; having once lived a life of sin, and detachment from the Lord, he easily relates to people from all walks of life and genuinely strives to encourage them to accept a relationship with the Lord, believing in his heart that their lives can be changed just as his was, through God.

Earhart has recently been part of a national campaign video series sponsored by The General Council of the Assemblies of God, entitled, “Nothing’s too Hard for God.” The video can be viewed at www.nothingstoohardforgod.com, selecting the forgiveness link.

Those with questions concerning the church or its programs can be directed to Earhart through email, eje1028@hotmail.com or by phone, 252-357-5300.

SUNBURY – Over his lifetime, James Staley (J.S.) Pierce Jr. wore numerous hats in service to his county and his... read more