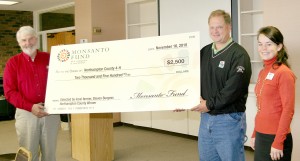 JACKSON — The Northampton County 4-H Club recently received a little help from the Monsanto Fund and a Conway farmer.

On Tuesday, Northampton County Cooperative Extension 4-H Agent Caroline Brown accepted a $2,500 grant from the Monsanto Fund, one that was secured by Steven Burgess of Conway.

Monsanto representative Bill Pritchett was on hand to present the check during the Northampton County Cooperative Extension Advisory Leadership meeting.

Burgess was selected as a winner in the America’s Farmers Grow Communities program, which gives farmers the opportunity to win $2,500 for their favorite local non-profit organization. Burgess had designated Northampton County 4-H to receive the award.

“I just felt like (Northampton County) 4-H could utilize the money to do good things for more people,” said Burgess. “I know they need the money to help support (the programs),”

Though he never was involved with 4-H as a child, Burgess began helping out at the Hertford-Northampton 4-H Livestock Show and Sale.

Burgess particularly likes the fact that 4-H focuses on the county’s youth.

“The children are our future,” he said.

Brown said the funds will be used for the livestock program and school 4-H enrichment school programs.

“The curriculum is offered to teachers to enhance hands-on experience classes,” she said.

Brown added that the livestock end the funds will help with increasing 4-Hers showmanship skills at a showmanship clinic in Edgecombe County and through the formation of a judging team for a state livestock competition, similar to a skill-a-thon.

“I feel most appreciative and very grateful that Mr. Burgess chose 4-H and cooperative extension,” she said.

In its initial year, the America’s Farmers Grow Communities program has provided nearly 500 farmers in 10 states with awards to direct to their favorite non-profit organization. On September 1, the program expanded nationwide to more than 1,200 counties in 38 states. The program is part of a broad commitment by the Monsanto Fund to highlight the contributions farmers make every day to society by helping to grow local communities.

The program is currently accepting farmers for the next $2,500 grant. To register go to www.growcommunities.com. Registration ends December 31.

For each registration received the Monsanto group will donate $1 to the local United Way to help food banks, food pantries, Meals on Wheels and other charitable programs that help fight hunger.