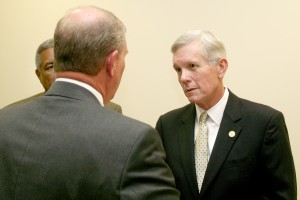 AHOSKIE – North Carolina Lt. Governor Walter Dalton doesn’t mince words when it comes to his passion for witnessing the growth of economic development initiatives across the state.

That belief in a prosperous future for North Carolina was apparent here earlier this week when the state’s second-ranking officer paid a visit to Ahoskie.

Meeting with leaders from the Roanoke-Chowan area, Lt. Gov. Dalton stressed the importance of keeping the doors open for small businesses and championed the need of advanced education to help bring the state and nation out of the current economic crisis.

“When I was sworn in as your Lieutenant Governor (in 1988), I knew that our economy rides on the backs of small business,” Dalton said during his presentation held at Roanoke Electric Cooperative. “That is of greater importance today. I’ve seen so many of our citizens lose jobs through the closure of textile mills; not only did they lose jobs, they lost healthcare, they lost retirement because that plan was tied to company stock and now that company is belly-up.”

In the same accord, he’s witnessed a strong will among North Carolina citizens.

“All our people want is an opportunity to work. That’s where small business plays such a key role,” he noted.

Dalton said one of the most important things he’s heard since conducting a series of economic meetings across the state came after he asked a small business owner what could be done to make his business stronger.

“He answered, ‘What can you do to make my community stronger’, Dalton recalled. “This was coming from an area in our state that was losing population. They were worried about their young people leaving and their community was weakened by that fact. If you don’t have a strong community then people are not coming through the door of your business. That hurts small business.”

Dalton said one of the biggest issues was the lack of credit to business owners.

“The money dried up, the banks wouldn’t loan money,” he stated. “I kept hearing stories of how small business owners were maxing out every credit card they could find just to keep the doors open, to keep people on the payroll.

“From that we created the Small Business Assistance Fund to help them get back on their feet,” Dalton continued. “It’s not a hand-out, it’s a loan and we’ve seen a great history of payback with this program. Golden LEAF contributed to this. The federal government is now proposing a bigger program, over 30 billion dollars, but we were the first out of the box with this.”

The Rutherford County native noted that North Carolina appears to have turned the corner on a tough economy, but state officials are still looking at a tough budget year.

“Some jobs are coming back, but it will take some extra time for the revenues to come back,” he said. “One national publication said four states will lead us out of this recession and we were one of those four.

“We’re rated as the best place in America to do business, and we’ve held that distinction for nine of the last ten years,” he added. “The problem is that business isn’t expanding right now during this national recession; in my opinion because of federal trade polices that sent jobs overseas and because of federal credit policies and oversight that led to a financial breakdown that dried up credit and hurt businesses here and nationwide.”

Lt. Gov. Dalton also touched on education, saying that 70 percent of today’s workforce needed to have at least a two-year college degree; 20 percent required four years of college and the other 10 percent listed as unskilled laborers. He promoted the state’s rising number of early college high schools.

“It accelerates learning and it saves parents some money. More than that, it prepares our children for the 21st century,” he stressed.

He said a key player in today’s educational process is the JOBS (Joining our Businesses and Schools) Commission.

He added that by offering specialized education at these early college high schools – agri-science, bio-technology, aerospace, language and global studies, hospitality tourism – those graduates can fit within regional economies.

“If you want to keep your young people in the region, if you want to have a vibrant economy for the future, it seems to me that you need to project what businesses you want and then ask those businesses what are the skills they need for their workforce. Then you can have an educational program that prepares students for those skills,” Dalton observed.

Curtis Wynn, CEO of Roanoke Electric Cooperative, asked local leaders from each county to share their issues with Dalton.

Bertie County Manager Zee Lamb said he was worried that given the grim outlook of the upcoming state budget compounded with the change of political power in the state legislature, programs will be cut and the state will, “push money down on the counties and the towns.”

“We need a champion to see that doesn’t happen,” Lamb stressed. “We’re a rural Democratic area in an urban, Republican led environment. We’ve already seen the shift of the money to the urban areas, now we’re seeing the shift of political power. I’m afraid this will adversely affect the rural areas.”

“If you’re going to close a budget hole and do it without raising taxes, then you’re right, it’s going to be pushed back,” Dalton remarked. “You are also correct about the urban shift…there will probably be about 12 or 13 counties that will have over 50 percent of the (state’s) population. The make-up of the state legislature is gravitating towards these urban areas because the representation is based on population. If this continues, I don’t know what that means for rural North Carolina. But I have seen some polls that show people in urban areas embrace rural North Carolina because a lot of those people came from rural North Carolina. They’re those kids you couldn’t keep at home, but they still have an affection for their homes.”

“The second issue is the needless state regulations,” he continued. “For example, a business wants to come to our county. They are in the certificate of need process, but missed the deadline by a few weeks. Now they have to wait an entire year even though everyone else is in support of this.”

“We’ve been working on expediting the permitting process. As far as grants, it’s a situation where is there money to grant given the state of the economy. There’s never enough money to go around,” Dalton said.

“They were created for a reason, a very basic reason in that infrastructure is the key to growth, the key for growth for our small businesses,” Williams stressed. “Rural North Carolina is behind in infrastructure improvements. Don’t make short term decisions to balance budgets without remembering the long-term benefits those funds provide. Not only do we have aging infrastructure, we have a lack of infrastructure. Please leave those funds intact.”

Dalton said he was a champion of those funds, but had no idea what the state legislature would do in regards to those pots of money…hoping they would not be shortsighted in their decisions.

“Funding such as this helps drive rural areas. It fuels the economy,” Dalton said. “We’re in a chaotic situation, but I feel that opportunities come out of chaos.”

Roanoke Electric Vice-President Marshall Cherry shared concerns of REC and other electric co-ops in regards to regulations proposed by the Environmental Protection Agency that may had adverse affect on the way these companies conduct business. He stressed a need for a balanced approach to devising new regulations for carbon emissions as well as the cost it will take to meet those proposed changes.

JACKSON — The Northampton Memorial Library renovation and addition project is well on its way. On Monday, the Northampton County... read more