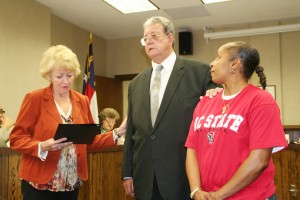 Dr. Jones, a native of Cofield who retired as a Lt. Colonel in the United States Army, was hailed as a local hero by the Ahoskie Town Council as they recognized him and millions of other military veterans for their service.

In presenting a resolution to Dr. Jones to honor his contributions to his county, state and nation, Ahoskie Mayor Linda Blackburn said she was proud to stand next to a true American hero.

“This does my heart good,” said the Mayor as she presented the resolution to Dr. Jones. “We thank you and all military veterans for your unselfish service to protect the freedoms we enjoy today.”

Dr. Jones, who later in his distinguished military career was the director of a U.S. Army Hospital, remarked he was equally as proud to call Hertford County as home.

“I’ve been all over the world, but it always was a joy to come home to a place where people truly care about one another,” Dr. Jones said.

Additionally, the resolution proclaimed Nov. 11, 2010 as Edward Jones Day in the Town of Ahoskie. Fittingly, Nov. 11 was also the national observance of Veterans Day. Dr. Jones served as the keynote speaker at a Veterans Day ceremony held in Ahoskie and sponsored by American Legion Post 102.

In part, the resolution pointed out that, “Throughout our history, courageous men and women have donned the uniform of our Armed Forces and built a noble tradition of faithful and dedicated service to our nation, one of which was Douglas Edward Jones.

“We can never fully repay our debt of gratitude to those heroic men and women who served, were wounded or even died in battle,” the resolution continued. “The unwavering commitment of our Soldiers, Sailors, Airmen, Marines and Coast Guardsmen has preserved our freedoms and saved millions around the world from tyranny.”

The resolution added that the Town of Ahoskie was proud to honor America’s 23.4 million living veterans, 770,000 that live in North Carolina, of which 1,663 are residents of Hertford County.