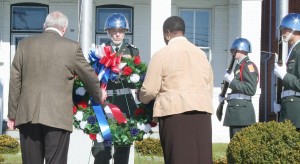 JACKSON — Author Cynthia Ozick once said: “We often take for granted the very things that most deserve our gratitude.”

Northampton County Veterans Director Jeff Futrell thanked those in attendance for taking time out of their day to honor those who have served in the armed forces.

“Their contributions to this country are unmeasurable,” he said.

Joenathan Harris, who served in the US Army and spent a tour in Vietnam, was the event’s guest speaker.

Harris spoke of the history of Veterans Day which was first proclaimed as Armistice Day for November 11, 1919 in the wake of World War I by President Woodrow Wilson. In 1938 another proclamation by President Calvin Coolidge made Armistice Day a legal holiday. In 1954, the name of the holiday was changed to Veterans Day, in an all-inclusive move to honor all veterans.

“As a veteran, I am honored to have worn my country’s uniform,” said Harris. “As a citizen, I want to honor those who are serving today.”

He noted the patriotism that comes with serving in the military.

“We are proud of our colors which are red, white and blue,” he said. “These colors never run.”

In addition to national pride, Harris noted prayer is just as important to soldiers.

“Prayer changes things,” he said. “Young cadets, if you have to go into combat always remember prayer.”

Also participating in the Veterans Day Ceremony was Northampton County High School-East JRTOC who presented the colors and played “Taps.”

Northampton County Commission Chair Fannie Greene and Vice Chair James Hester, assisted by NCHS-East JROTC, participated in the laying of the wreath at the memorial in front of the courthouse.