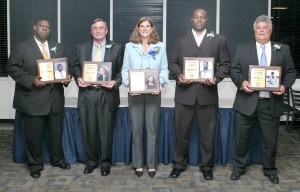 MURFREESBORO – Five new names have been added to the Chowan University/Jim Garrison Sports Hall of Fame.

Now in its 25th year, the Hall of Fame now includes the likes of the following:

Alyson Barnes Faulconer – a standout volleyball player;  following a solid two year career at Chowan in the early 80’s, Alyson went on to East Carolina University to continue her education and playing career. She currently serves as Senior Vice President of ‘the little bank, Inc.’ in Greenville and has over 20 years of experience in the commercial banking industry.

Leslie Daniel “Danny” Morgan – standout golfer on the men’s golf team in the late 1960’s. The Franklin, Virginia native represented Chowan at the NJCAA National Golf Championships both years he was on the team. He furthered his education and playing careers at Virginia Wesleyan College and currently serves as the Head Golf Professional at Cypress Cove Country Club in his hometown of Franklin.

Bobby Ray Smith – is the only Chowan men’s basketball player (1985-87) to ever play in the storied Big East Conference (with then conference member Boston College). He led Chowan to a 48-15 record over his two years. For the last 20 years Smith has been employed with the Office of Children and Family Services in the state of New York.

“ Being a product of Murfreesboro is special. I had the opportunity to be around Chowan from a very early age. I became a ‘Brave’ a long time ago,” said Dixon. “Early on in my life I was fortunate to have an individual who showed me how to become a winner; his name was Jim Garrison and what an impact he had on my life. He taught me how to be a winner on the field and in life.

“Life is just a big collage of memories…some good, some bad. I learned that you get out of any situation exactly what you put in it. I learned that Chowan will always be at the top of my list of great memories, ones I’ll carry with me for the rest of my life,” Dixon concluded.

“I would have never believed 25 years ago when I attended school and played sports at Chowan that I’d be standing here today to be inducted into the Hall of Fame,” Faulconer said. “I have fond memories of my two years at Chowan, both academically and athletically. Growing up in a small town in a conservative Baptist family, Chowan was the perfect place to start my transition into adulthood. The facility and staff were caring and nurturing. The academics and athletic programs were very strong.”

She continued, “I would like to thank the administration here, past and present, for their strong commitment to women’s athletics. Years ago, when other colleges did not show the commitment to women’s sports, Chowan already had competitive teams and state of the art facilities. The success of the volleyball program was set years ago by coach Janet Collins. I thank her for her commitment and dedication to Chowan women’s athletics.”

“I thank you for this prestigious honor; it’s one I will forever cherish,” Morgan said during his acceptance speech moments after he was presented for induction by his son, Adam.

“My time at Chowan was very special,” he added. “It gave me the opportunity to play golf; to compete in two national championship tournaments (finishing 7th and 6th); receive a great education and learn valuable lessons of life. It’s also the place where I met an amazing man who became my mentor and my friend, coach Jim Garrison. But most importantly, it was the place I met the love of my life, my wife.

“I’m now living a dream come true – blessed with a wonderful family and getting to do something everyday that I enjoy so much…play golf. For you golfers in the audience, we believe there’s nothing better than a hole in one. I’m here to tell you it is second to a successful marriage and two wonderful sons,” Morgan closed.

Morgan’s Hall of Fame ring was courtesy of Dennis Helsel and John Tayloe.

Smith was very emotional during his acceptance speech, often fighting through the tears as he recalled his life.

“My mother always urged me to expand my horizons beyond the things that I could easily see…to always smile; to always take care of your friends and family; to remember that you are only good for the last thing you did for somebody,” Smith said. “I also thank my father; I never heard him complain over my 44 years. He faced adversity and challenges….he let me know that life is a marathon and not a sprint. He taught me how to stay focused on your goals.”

Smith continued, “Here, at Chowan, I was treated like family by coach (Bob) Burke and Jane (his wife). Their house was always open to the players. And to ‘Chap’ (Rev. Hargus Taylor, Chowan’s retired chaplain), you got me through some tough times. He and coach Burke drove me. Chowan changed my priorities, it made me realize the importance of education. Chowan gave me the intestinal fortitude to succeed.

“To the honorees here tonight, there’s nothing better than to be inducted in this Hall of Fame and represent this great university. This place is truly the foundation of all I’ve accomplished. It made me a better husband, a better parent, a better friend and a better servant,” stressed Smith in his closing remarks.

Felicia Watson, a cousin of Smith, presented him for induction. His Hall of Fame ring was sponsored by Taylor’s Insurance.

“I had a great time here; my life was changed here at Chowan,” Martin remarked. “I always felt so welcomed here by everyone.

“Then there’s Jim Garrison,” he continued. “Most think of him for only football, but that’s not entirely true. He taught us, first and foremost, to love God, to respect God. The second thing was he stressed to us to be the best citizens we could be. He stressed academics. He was an inspiration in my life. I took what he taught me and used it to the best of my ability.

“When I think of Chowan, I think of great people; I think of heaven; I think of coach Garrison as one of God’s very special angels. God fortunately put you in my life,” Martin concluded as he walked from the podium and hugged his former coach and mentor.

“To the Hall of Fame Class of 2010, if I can steal a phrase from tonight, your ‘dash’ is just beginning with your relationship with Chowan University. Sometime in the future, perhaps you can give a ring to a new Hall of Fame member,” said Helsel, Chowan’s Director of Athletics, who presided over the Nov. 6 banquet held at Thomas Cafeteria on the university’s campus.