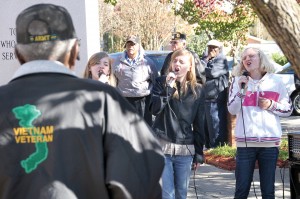 A veteran of the Vietnam War was among a crowd numbering in excess of 100 that attended Thursday’s Veterans Day ceremony in Ahoskie. That event included several patriotic songs performed, as shown here, by “Captured Hearts” of Rich Square. Staff Photo by Cal Bryant

AHOSKIE – For Dr. Douglas E. Jones (Lt. Colonel – US Army; Retired) and millions of other living military veterans like him, the check they wrote years ago to proudly serve and defend their country remains uncashed.

Dr. Jones served as the featured speaker here Thursday morning – at the 11th hour on the 11th day of the 11th month – the time when America annually salutes its brave military personnel. Under beautiful blue skies and a gentle, cool breeze blowing from the north, the event, staged by local American Legion Post 102, was held at No Man’s Land Park in downtown Ahoskie.

Jones said for everyone that wore a uniform, yesterday and today….“we wrote a blank check. We’re still living and the check has not yet been cashed. It was deposited on the day we were conceived. The account is full, but the check is still blank. All the veterans I know are willing to give that last measure before cashing that check. They gave all their mental being for the freedom of this country.”

The Cofield native knows what it’s like to serve in a time of war. He saw two tours of duty in Vietnam and also witnessed military action during the Berlin and Cuban crisis.

The C.S. Brown High School graduate was a highly decorated combat medic who earned four Purple Hearts, the Legion of Merit Award and the Bronze Star. He also served his country as an Army Hospital Director.

But yet for all that loyalty and patriotism, Jones remembers others that “served” as well. Dr. Jones referenced the number of military veterans – 23,400,000 – currently still breathing God’s clean air. Of those, 1,800,000 are women.

“We tend to forget sometimes that women are veterans too,” Dr. Jones remarked. “We also had females in the state of North Carolina who joined the military, but not as those in military uniforms. They joined to fly junk aircraft to stations for repair, or to fly these wrecks as targets for the artillery. I consider them veterans too.”

Dr. Jones’ definition of a veteran was far-reaching.

“For those that did not wear a uniform and go abroad; those that stayed on the farm to raise peanuts, corn, cotton and tobacco – the food and the fiber; the fiber that made our tents, our uniforms; those that were tree farmers, giving us material to box our bullets and crates to ship the butter, I think those are veterans too. They suffered back here worrying about us,” he stressed.

Dr. Jones also told the story of Ruth Rose Henderson, a 92-year-old Cofield native, now a resident at a nursing home in Windsor.

“She joined the Army volunteers as a private in World War II,” Jones recalled. “A few weeks later she was told that she had leadership qualities, enough to send her to OCS (Office Candidate School). There they found out that she was a college graduate and a physical therapist, and instantly promoted her to Lieutenant. She is credited with returning 20,000 military veterans to a productive life. She is a veteran too.”

He continued, “I think of the little pint size Red Cross worker we had in the field hospital in Vietnam, all 72 pounds of her. She was the best shot we had, especially shooting at night. We were attacked every night and she filled a void along the perimeter. The next morning was evidence of her accuracy. She did more than serve us doughnuts and coffee; she saved our lives; she is a veteran too.”

Dr. Jones’ 92-year-old father, Tupper Jones of Cofield, was among the large audience to hear his son’s Thursday morning speech.

Also in attendance was “Captured Hearts” of Rich Square, a group of talented sisters that performed several patriotic songs. In perfect harmony, they also delivered a stirring rendition of the National Anthem.

The Hertford County High School Color Guard also took part in the event, one that began at 10 a.m. with a parade down Main Street.

Post 102 Commander John Bracy served as the Master of Ceremonies.

MURFREESBORO — Officials say the source for what caused the recent water contamination here has been isolated, but they are... read more