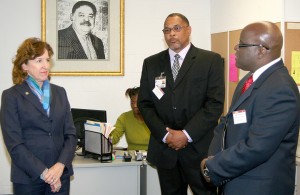 AHOSKIE — For US Senator Kay Hagan (D-NC), broadband Internet access means a lot of things, but, perhaps, the most important during this time of economic hardship is jobs.

On Wednesday, Senator Hagan made a stop at Roanoke Chowan Community College (RCCC) to tour the JobLink Center, visit a nursing class, and to discuss the importance of broadband Internet access.

For the discussion, Hagan was joined by Joe Freddoso, president and CEO of MCNC and Jane Smith Patterson, executive director of the e-NC Authority. RCCC President Dr. Ralph Soney greeted Hagan along with a group of community leaders assembled by RCCC.

Hagan, Freddoso and Patterson spoke about a $146 million broadband Internet project that will allow for the engineering and construction of approximately 1,600 miles of new fiber and the acquisition of 900 miles of existing fiber in 79 mostly rural North Carolina counties.

The broadband project would bring a direct fiber connection to MCNC’s North Carolina Research and Education Network (NCREN) to the RCCC campus.

“In this tough economy it is more important than ever to equip our rural communities with this 21st century tool necessary to compete in today’s global market place,” said Senator Hagan. “Because when we invest in broadband, we invest in jobs, we invest in families, we invest in students and we invest in North Carolina’s future.”

MCNC received $104 million in federal funds in two rounds of awards from the BTOP program. The BTOP program was funded as part of the American Recovery and Reinvestment Act of 2009 (ARRA).

MCNC also raised $42 million of private funding to match the federal investment. The Golden LEAF Foundation provided $24 million of the private matching funds. Hagan led the North Carolina delegation in a letter of support for MCNC’s application for stimulus money.

“I was extremely proud to announce this year that this entity (MCNC) received $100 million through two awards to build broadband fiber across rural North Carolina, bridging the digital divide in 79 counties (with both rounds of BTOP funding) and bringing 1,500 jobs in our state,” said Hagan.

With the funding, MCNC will expand the optical footprint of its NCREN which serves as the backbone Intranet and Internet for all of K-20 public education and most private colleges and universities in the state.

Freddoso said NCREN service before the stimulus was on the verge of being cut back as students increased their use of the network by 40-50 percent per year.

“Our problem was there was not fiber optic infrastructure in rural North Carolina that could keep pace,” he said.

Freddoso said the network was facing in five years either taking away the opportunity of virtual classes or pricing out of range that the state could afford. That changed with ARRA funding.

RCCC utilizes virtual learning to offer a comprehensive set of post-secondary classes to students in the region. The college will have a direct fiber connection to NCREN as a result of the MCNC BTOP awards.

“In the round two of the (BTOP) application, Dr. Soney was kind enough, and we haven’t identified the exact plot of land yet, but to donate to us a 10 by 20 plot of land where we will put a regeneration hub and an interconnect point on this campus,” said Freddoso. “The opportunity is this campus can be a leap off point for rural individual citizens and (organizations and businesses).”

He said with the funding, private sector companies will have access to the wholesale part of the network, taking away some of the cost so those companies can deploy broadband.

President Soney spoke about the need for broadband in education and what the direct fiber connection to NCREN would do for the campus that serves rural students.

“We’re excited about the fact that you have been a champion for investment for North Carolina’s broadband infrastructure,” he said. “We’re equally excited that you have had the foresight to know this basic investment goes far beyond the major population centers of our state, but to our communities that are rural and small.”

During her time in front of the crowd, Hagan spoke about the work of MCNC and one of its partners, e-NC.

This year, e-NC received more than $6 million from the federal stimulus and $400,000 from the Golden LEAF Foundation. Those funds will be used to improve broadband service data collection, producing comprehensive, accurate maps of service availability; promote the benefits of broadband use to citizens; work with service providers and state leaders to find solutions to deploy broadband to all un-served and underserved areas of rural North Carolina; and ensure all citizens, businesses and organizations have the bandwidth necessary to compete in today’s global economy.

“Its (e-NC) mission (to bring) broadband to North Carolina’s most distressed counties, along with the training and the education essential to finding and creating new jobs and as I said it’s all about jobs, jobs, jobs,” said Hagan.

Hagan said since coming to the US Senate she has made securing federal broadband infrastructure grants for North Carolina her priority.

“Now North Carolina is among the top seven states in federal broadband investment dollars,” she said.

Hagan noted how broadband Internet access is vital to education.

“When this fiber is built, students in rural schools, community colleges, students in our universities will have access to a network that can meet their research and education needs well into the future,” she said.

Hagan said broadband is just as important to rural businesses to compete in a global economy as traditional infrastructure like water systems and roads.

She referred to a Camden County farmer she had met who is one of the biggest potato suppliers to Frito Lay. She said the farmer has to provide a daily update to the company about his crop. In order to do this the farmer has to drive back to his home or into Elizabeth City in order to gain broadband access. She noted the waste of time in the process with the farmer not having broadband on site.

“So this (broadband access) is critically important in everyday lives, not only in urban counties but in rural North Carolina too,” she said. “In this economy, goods are often bought and sold to the highest bidder with the fastest Internet connection.”

Along with students and businesses she also said emergency responders also needed access to broadband to keep the communities they serve safe.

“This is really, really exciting stuff,” she said.

“Our goal is to improve broadband data collection across North Carolina,” she said. “As citizens you can advocate for yourselves as well and I’ll help you advocate at the state level at the same time.”

Patterson an interactive map will be launched in December on the authority’s website that will map out areas that are served.

She also mentioned a map done by the Federal Communications Commissions showing the areas across the nation.

“The end goal is to find all unserved areas in North Carolina and underserved areas of the state and to figure out the best ways to serve those areas,” she said.

Patterson added they are also working to get the most affordable Internet service so that everyone can have equal access to it.

Patterson also spoke about how the state received $275 million in federal funding this year for broadband projects.

“So the federal stimulus really did work, it really did get down to you at the local level in the area of broadband” she said.     Freddoso and Patterson said that in order to make the opportunity happen partnerships need to be forged. Freddoso said fiber connection for RCCC is tentatively expected in the next 18 months.

JACKSON — No prayer before a public meeting is frustrating to one member of the Northampton County Board of Commissioners.... read more