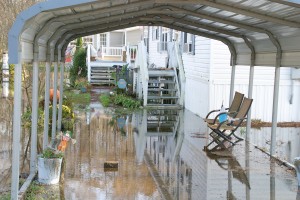 Residents of the Village of Tunis on the Chowan River have dealt with flooding issues for years, thus putting a strain on their private septic systems. File Photo by Cal Bryant

WINTON – The next two steps in providing Tunis residents with a centralized sewer system were taken here earlier this week.

On Monday, the Hertford County Board of Commissioners unanimously agreed to authorize the order for $400,000 in Sanitary Sewer Bonds as well as to set the referendum date for Feb. 1, 2011 and to approve the language included on that referendum question.

The bonds, if approved by registered voters of Tunis, will be combined with a $1.225 million grant from the Rural Development arm of the United States Department of Agriculture (USDA-RD) and a $500,000 grant from the NC Rural Center that will provide the lion’s share of constructing a $2,068,300 sanitary sewer system for the residents living in this small Hertford County community on the shores of the Chowan River southeast of Winton.

Originally, the bonds were listed at $300,000, but Hertford County Manager Loria Williams said at Monday’s meeting that some cushion was needed.

“We know the difference between the grant money and what we would need to complete this project is $307,000,” she said. “In order to give ourselves some cushion, we increased that amount to $400,000. We can issue up to that amount; you don’t have to, but it does give us some cushion once the bids begin to come in.”

“It is intended and expected that user fees will pay that (the bond),” added Charles “Chuck” Revelle, who serves as legal counsel for the commissioners.

The commissioners then conducted a required public hearing prior to the board voting on the bond authorization.

“If user fees can’t pay for this, will taxes have to make-up the difference,” Blowe asked.

“Yes, that is correct,” answered Revelle.

Blowe then wanted to know what kind of tax, to which Revelle replied would be a property tax for just those living within the sanitary sewer district in Tunis.

“When the debt is satisfied, with added taxes possibly used, will the tax rate go back to the regular county rates,” Blowe inquired, to which Revelle answered, “Yes.”

“If there are taxes, will they be levied on all property owners, not just those who signed up (for sewer service),” Blowe asked.

“That is correct,” said Revelle.

“There was a discrepancy over the bond amount when it was originally reported in the newspaper as $300,000. What you’re now saying it that it still may be $300,000, right,” Blowe inquired.

“Yes, and it could be less, depending upon the bid and to put on a special referendum,” answered Williams.

“Once this process goes through, the next process will be a vote, is that correct,” Blowe asked, to which Williams confirmed.

“The number one question is who gets to vote,” Blowe noted.

Blowe noted that out of over 40 properties in the much needed area, the area down the hill in Tunis, this is not the primary residence for over half of those property owners. “They own the property, but some live out of state; some are out of the county and some are out of the (voting) district property owners. So I guess they will not get to vote in that referendum,” Blowe speculated.

“That is correct,” answered Revelle.

“We also have non property owning renters in the community. They are residents, but do not own property. They will get to vote, right,” Blowe asked.

“If they are registered voters living in the district, renting or owning, they can vote on this,” Revelle stated.

“The problem is we’ll have people helping to make this decision (by vote) with nothing at stake. They have no investment. They don’t pay property tax, but yet they’ll help make a decision for those who do not get to decide,” Blowe noted, again alluding to the out-of-district Tunis property owners.

Blowe informed the board that some Tunis residents have been pursuing sewer service since 2003.

“We have a list of those who were in favor of it back then,” he said. “Now we have some new people there and some have died since 2003. I would say that about 95 percent of those who need this, those living down the hill, are in favor of this. There are some very concerned that because this is their secondary home, their summer home, they won’t have any say in this.”

Revelle stated that even though a renter does not own property, they do have something at stake.

Revelle added that the county cannot do anything about the fact that only registered voters living in the Tunis Sewer District will decide this issue.

Blowe asked where the vote would take place and when.

“It will be at the normal polling places for Tunis,” Revelle answered, to which Blowe noted that Tunis residents cast ballots at two precincts (Cofield and Winton).

“The Board of Elections will meet on that and make that determination,” Williams said.

“We just want to make sure that everybody has the opportunity to participate (in the referendum),” Blowe stressed.

“We operate under the Voting Rights Act, so we can’t change the polling place,” Revelle said.

Blowe asked if there will be a mandatory sign-up for all residents in the sewer district, or just for those whose current private septic systems are experiencing trouble.

“It can be mandatory or not, that will be decided as we move along in this process,” Williams replied. “We will schedule an informational forum for Tunis residents; we can come to you or you can come here for that information.

“I do want to make this point,” Williams continued. “You asked who’s benefitting and who’s not benefitting. The benefit is this: the lot size in Tunis has always been an issue; repair and rebuild (of private septic systems) has always been an issue. The governing body can and may, once a centralized system is in place, relax some of those rules. It is a benefit to that whole region because we know that some of the soils there don’t perk very well. It’s a benefit for property value.”

“We believe, like you, that this is a benefit, but what I’ve run across are those who don’t live in the lower part, who live up the hill in Tunis, and their (private) sewage system works fine,” Blowe stated. “They don’t want the added expense; in a lot of cases they are older people and they don’t want this extra expense forced on them; an extra bill they have to pay.

“For me and for 95 percent of my neighbors who live in the lower part, we want you to start digging tomorrow,” Blowe continued. “We’re ready for this. With the last big rain we got, the first thing we have to do is pump our (septic) tanks out. When the water comes up, the tanks get full, and it’s not sewer water.”

Blowe said it was critical to provide accurate information to those living in the district.

“That way when we do go and vote, we don’t have false information that’s scaring people to vote no,” he stressed. “We do want this to pass. We need to ease some tensions among those who think this system is not needed right now.”

Blowe also asked that once this system is in place and there’s a property owner not signed up to receive the service and they experience a problem with their existing private septic system, would they be allowed to make repairs or be required to sign-up and hook into the county’s sewer system.

“That’s a good question; that’s something we’ll have to discuss,” Williams said.

If the referendum passes, Blowe asked how early will the hook-up fees be required.

“We will start the process immediately,” Williams answered, adding that the hook-up fees have not yet been determined.

She added that mandatory vs. non-mandatory hook-up will be determined strictly on whether or not the number of those using the system – per user fees, added property tax or both – will be enough to meet the debt connected to constructing and operating this sewer system.

“If this sewer bond doesn’t pass, all of the $1.7 million in the two grants we received goes away,” Williams stressed.

“My purpose in this is to ensure this goes through,” Blowe concluded.

Commissioner Ronald Gatling suggested the county mail a fact sheet concerning the sewer system to every resident in Tunis prior to the information session Williams alluded to earlier.

“This is important to the river, to the environment,” Commission Chairman Johnnie Ray Farmer said of having a sanitary sewer system in place.

Over the years, Tunis residents have experienced problems with private septic systems; some did not have one at all, rather “straight piping” raw sewage into inappropriate containers and hauling it offsite. Those environmental concerns were discovered in the spring of 2008, prompting the State of North Carolina to issue notices of violation against some Tunis residents using the “straight piping” method.

Additionally, environmental health personnel also learned in 2008 there were existing septic systems too close to the water, meaning they do not meet setback requirements for sewer systems.

While Hertford County officials devised a plan to alleviate these environmental concerns, Tunis residents were granted “pump-and-haul” permits by the state. That means they are placing certain types of holding containers into the ground, and then certified pumping technicians go in and remove the waste. That solution was deemed as temporary until the county could come up with enough funds to install a sewer system for the entire community.

While the grant/loan will pay the upfront construction costs, the sewer district will require long-term operational and maintenance costs. Those costs (user fees) will be paid for by Tunis residents.

“This will be treated just like our Northern and Southern Rural Water Districts here in Hertford County,” Williams noted at an earlier meeting. “This will be a sewer district, paid for by those using the system and not by all Hertford County citizens.”

WINTON – A pay raise request made on behalf of the Hertford County Alcoholic Beverage Control (ABC) Board has been... read more