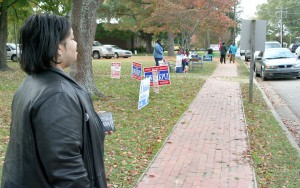 Crystal Williams, the wife of candidate Marcus Williams, waits to hand out campaign material outside the Murfreesboro 1 precinct on Tuesday. Her husband was one of six vying for three seats on the Hertford County Board of Education. Staff Photo by Amanda VanDerBroek

Incumbents may not have fared well nationwide, but they did in the Roanoke-Chowan region.

Locally, the incumbent congressman won Bertie County by a large margin. He was tabbed on 3,899 ballots compared to 2,468 for Woolard. He also took Hertford County easily as he was named on 4,380 ballots while Woolard received 2,133. In Northampton County, Butterfield won 4,575 to 2,959.

The only local county that voted Woolard’s way was Gates County where the challenger received 1,637 votes, three more than Butterfield’s 1,634.

In the state senate race, Senator Jones easily won reelection to his District 4 seat by capturing 62.4 percent of the vote. He was tabbed by 28,825 voters in Bertie, Chowan, Gates, Halifax, Hertford, Northampton and Perquimans counties.

Rep. Mobley won four of the five counties she represents in the North Carolina House of Representatives (District 5). The only county won by her opponent, Matt Peeler, was the challenger’s home of Perquimans County.

I have in some ways been a Randy Moss supporter for much of his career. I don’t own his jersey,... read more