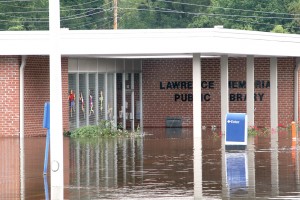 For the second time since 1999, floodwater from the Cashie River caused extensive damage to the Lawrence Memorial Public Library in downtown Windsor. Repair work, projected at nearly $26,000, will begin soon. File Photo by Thadd White

WINDSOR – The Bertie County Commissioners have moved forward with the process of repairing and reopening facilities damaged in last month’s flooding.

During their regular meeting held Monday morning in the board room of the Bertie County Department of Social Services, the commissioners approved repairs to several buildings including Lawrence Memorial Library, the Day Reporting Center, the Bertie County Sheriff’s office and the county office building.

Since the flooding, county leaders have been discussing the importance of moving the library to higher ground. They reiterated Monday their intention to move forward with that priority.

At this moment, however, the board approved using money from insurance to put the library back into its current location on Dundee Street.

Building and Grounds Supervisor Anthony Rascoe appeared before the board to give them updates on several buildings and included a repair list for the library. Electrical, painting, carpet and general repair work will cost the county $25,710.32 to get the building in order.

Albemarle Regional Library Director Gary Hoyle told commissioners they could either repair the current facility and open the library there until a new building was built or they could put the library in a temporary facility until one was constructed.

Commissioner J. Wallace Perry asked if it would be better to put the library back into its current location using money from insurance and then begin the process of moving it and Hoyle said he thought that would be the best solution.

Perry offered a motion to approve the approximately $26,000 expenditure to rehabilitate the current facility and Commissioner Rick Harrell offered a second. It passed without objection.

The board members did, however, make it clear they wanted to move forward with relocating the facility in the near future, possibly within the next two years.

Commission Vice Chairman L.C. Hoggard III suggested the library board work with the Choanoke Area Development Association and other agencies that may be looking to build in the county to see if there was a way to share building costs.

Hoyle reported that the library currently has $175,000 in a building fund and received $20,000 from Perdue last week to be used for the library.

The board agreed that money would be a good start toward a facility, but agreed the building could cost more than $1 million.

Hoggard asked the board to agree for Lawrence Memorial Branch Manager Nancy Hughes to form a committee and bring back a recommendation to the commissioners within six months. The board agreed to form the committee by consensus.

The board also agreed to move forward with repairs to the office of Bertie County Sheriff John Holley, but decided to halt those repairs until a thorough check for mold could be completed.

Rascoe said the electrician working in the sheriff’s office would complete his work this week and that the air conditioning unit would take two weeks to install. He then said there was a minor issue that had not been addressed.

“In the evidence room there is a black spot on the wall and it has never been checked,” Rascoe said. “There is also a crack in the wall that needs to be repaired.”

Rascoe said the contractor would replace the sheetrock that had been cracked and covered with the spot for approximately $1,000. That would not, however, make sure there was no mold in the building.

He said the mold testing would cost approximately $750.

“I think we need to ensure there is no mold in that building,” Perry said.

“How can we not do it,” asked Harrell. “I agreed with Commissioner Perry that it has to be done.”

Perry moved to authorize Rascoe to spend up to $2,500 to alleviate the problem and Harrell seconded the motion. It passed by a unanimous vote.

After the discussion, Assistant County Manager Morris Rascoe asked if it would not be wise to stop renovation until the mold test came back.

“You don’t want to continue work and then find out there are mold spores everywhere,” Morris Rascoe said.

Commission Chairman Norman M. Cherry Sr. instructed the two to follow those plans but to rush the mold testing as quickly as possible.

The board also agreed to add an additional $2,000 worth of work to the Day Reporting Center for repairs and carpet cleaning.

Work on the roof for the center is near completion, the board was informed.

In their final action dealing with buildings, the board agreed to take no further action on the old county office building on Queen Street. The flooring and walls have been removed, but no further work will be done at this point.

“We have asked for a study on how we use all of our buildings,” Harrell said. “We have one group here and one group there and we need to see what we need before we start spending money on that building.

“It’s just my opinion, but I don’t think we should do anything else until we decide what we’re doing overall,” he added.

The board agreed by consensus to follow Harrell’s recommendation and not proceed with any further work at the current time.

WINDSOR – Two hundred and seven years after it was built, the Hope mansion at Hope Plantation remains as a... read more