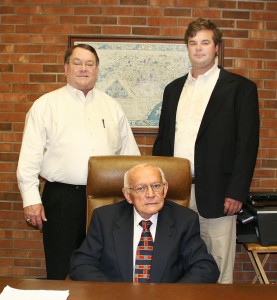 “We will maintain the same level of services that each agency has built its reputation on over all these years,” Robertson said.

Robertson added that the agency will continue to service its loyal customers, as well as new clientele, with home, auto, life, health and all forms of business insurance.

While the newly consolidated companies will call 801 East Memorial Drive (the current location of Boyette & Robertson) as home, the Main Street office will be maintained over the next 10-to-12 months.

“To allow for customer convenience, we will keep both offices open during this transition,” said Pierce.

Joyner said that as the policies renew for his customer base, those payments will be directed to the Boyette & Robertson office.

“Once everything cycles through, everything will come out of this (Boyette & Robertson) office,” Joyner noted.

The newly merged firms feature a combined 234 years of insurance service between the two staffs.

“To maintain the same level of service the customers of these two agencies have grown accustomed to over the years, we will maintain the amount of personnel needed,” Pierce said.

“We will be your one-stop shop for insurance,” Joyner stated.

Boyette retired in 1972 at which time Robertson became the sole owner of the agency. David M. Robertson was associated with the agency until his death in 2008. Pierce acquired an interest in the agency in 2009.

Greene-Bryant-Joyner Agency was originally known as the Greene Agency, founded in 1947 by Bill Greene. The original office was located on the second floor above what was then the Earl Theater on Main Street.

Four years later (1951), Joseph R. Bryant founded the Bryant Agency. He merged with Greene in 1967 to form Greene Bryant Insurance Agency. That business was located at 325 West Main Street, the current location of the agency.

Greene retired in 1981 at which time a portion of his interest in the agency was sold to Larry Wynns and the name was changed to Greene-Bryant-Wynns.

Dan Joyner was hired by the firm in 1985. Wynns left one year later and Joyner purchased his stock in the firm, changing the name to Greene-Bryant-Joyner. Bryant died in 1992 and the agency’s ownership went to Joyner.

For more information about the consolidation, call 252-332-5127 or e-mail br@boyetterobertson.com.

MURFREESBORO — Town officials here may be looking to amend their solid waste plan in order to receive funds to... read more