GATESVILLE – Dust off a spot in the trophy case, a new piece of hardware is on its way. 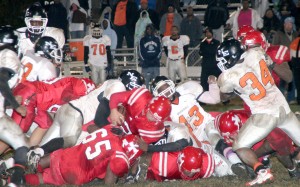 Gates County senior quarterback Graham Hobbs fights for a few extra yards during Friday night’s home contest vs. North Edgecombe. Hobbs threw for two scores and rushed for another to lead the Red Barons to a 19-18 victory. Staff Photo by Cal Bryant

With the victory, Gates County (5-0 in league action; 9-1 overall) claimed no worse than a tie for the 2010 Tar-Roanoke Conference football championship. The Red Barons can polish off an unbeaten league season and lay claim to sole possession of first place by beating conference cellar-dweller Kipp Pride at home next Friday (Nov. 5) in their regular season finale.

North Edgecombe (now 7-3 overall) was unbeaten in conference action until last night, thus setting up a key battle between both teams as each had their eye on the league championship. In a game of high drama and pad-popping hits, neither the ‘Barons nor the visiting Warriors left anything on the field.

From there, Gates County turned to “Superman” – junior running back Dashawn Stokley (all 5-foot, seven-inches, 165 pounds of him). On eight of the next nines snaps, Stokley plowed ahead, gaining 32 yards on the drive and setting the table for Hobbs’ game-winning pass to Badgett who had slipped behind the North Edgecombe secondary and was running free down the home sideline.

Stokley, who finished with 33 carries, was the game’s leading rusher with 122 yards.

After an exchange of punts by both squads, North Edgecombe had one final chance with a shade over one minute left in the game. However, their dream of a league title was fumbled away when Keltsey Richardson lost the handle on the pigskin and Corey Smith recovered for the ‘Barons to seal the win.

Down 18-7 at halftime, the Red Barons scored on their first series of the third quarter – a beautifully executed 13 play, 83 yard drive that took nearly six minutes off the clock. The entire march was on the ground, led by Stokley (six carries, 29 yards), a key 37-yard scamper from back-up running back Brandall Riddick and two gusty runs inside the six yardline by Hobbs, the last coming on a one-yard sneak to paydirt where he was initially stopped, but spun off a tackler and stretched the ball across the goaline. The PAT kick failed, but the ‘Barons had trimmed their deficit to 18-13 at the 2:43 mark of the third period.

That drive came after a key defensive stand by the ‘Barons, including a fourth down tackle by Tyvon Pittman that put the brakes on the Warriors at the GCHS 17 yardline. It was that type of play that highlighted a huge defensive effort by Gates County in the second half. There, they surrendered only 94 yards of total offense, after giving up 228 yards over the first 24 minutes of action.

North Edgecombe built their 18-7 halftime lead on the strength of three, second quarter touchdowns – scoring runs from Nathaniel Epps (17 yards) and Johnnte Ward (30 yards) and a 40-yard TD pass from Kadeem Alexander to Montrezl Harrell. However, the Warriors failed to convert any of their two-point conversion attempts, a fact that would haunt them later in the contest.