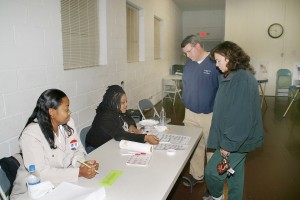 Registered voters throughout the Roanoke-Chowan area face numerous choices for a variety of political offices as listed on the Nov. 2 General Election ballot. File Photo by Cal Bryant

Choices will be abundant for local and statewide voters when they head to the polls Tuesday.

Polls open throughout North Carolina at 6:30 a.m. Tuesday and will remain open until 7:30 p.m.

Voters will make selections for the United States Senate, US House of Representatives, North Carolina Senate and North Carolina House. There will also be local races in all four local counties.

Statewide, the top of the ballot begins with the United States Senate seat currently held by Richard Burr. The Republican is being challenged by incumbent North Carolina Secretary of State Elaine Marshall as well as Libertarian candidate Michael Beitler, who serves on the faculty of The Bryan School of Business & Economics at the University of North Carolina-Greensboro.

U.S. House of Representatives District 1 incumbent G.K. Butterfield (D) is being challenged by Ashley Woolard, a Republican from Washington. Woolard is Vice President of the Woolard Insurance Agency.

North Carolina State Senator Ed Jones (D- Halifax) will be challenged in the election by Republican Rich Halbert, a retiree from Chowan County.

Democratic incumbent Annie Mobley of Hertford County is also being challenged in Tuesday’s election for her seat in the NC House of Representatives. She will face Republican Matthew Peeler, a retired Navy officer.

None of the four counties will have a contested race for District Attorney. In Bertie, Hertford and Northampton counties, incumbent Valerie Mitchell Asbell is running unopposed while Gates County voters will see the name of incumbent Frank R. Parrish on the ballot.

In each of the four counties, there will be individual races.

In Bertie County, there are a variety of races, including sheriff, county commissioner and board of education.

In the sheriff’s race, incumbent John Holley (D) will meet the challenge of Republican Brian Knowles.

In the non-partisan portion of the ballot, incumbent District 3 Board of Education member Rickey Freeman will seek a fourth term on the board. He is being challenged by Formeka Capehart Wallace.

District 4 board member Alton H. Parker is seeking a second term on the board. He has no opposition on the ballot, but James Bell has announced a write-in campaign for the post.

Gates County will have competition for the District 1 seat on the county commissioner. Democrat Jack Owens, who defeated incumbent Carlton Nickens in the May primary, will face the challenge of Republican Jim Miller.

Incumbent Sheriff Ed Webb, a Democrat, will also be challenged in his reelection bid as he faces Republican James “Gary” Ingram.

None of the local partisan elections in Hertford County are contested.

The Hertford County Board of Education race, however, has six candidates vying for three seats.

Incumbents John D. Horton and Dennis M. Deloatch are seeking reelection while Tracey Tayloe Brown, George W. Holley, Sheila J. Porter and Marcus Williams are challenging for a spot on the board as well.

To the Editor: Recently, my sister had to rush her husband to the hospital due to severe abdominal pain. He... read more