GATESVILLE – A remarkable season came to an end Tuesday. 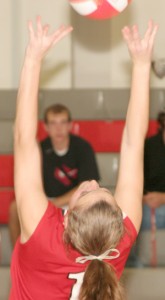 Despite earning 20 victories, winning the Tar-Roanoke Conference regular season and tournament titles and having a stellar season, the Lady Red Barons couldn’t overcome the obstacles in their path Tuesday.

In addition to having senior Monica Bond playing injured, Gates County was without the services of classmate Danielle Adams. She injured an ankle in Friday’s opening round game and missed the match Tuesday.

Perquimans got off to a quick start in the first game of the match, leading 14-4 before Gates County rallied.

The Lady Barons scored on defense and then and then junior Lauren Burgess recorded a kill on Crystal Hoskins’ serve to close the gap to 14-6.

After stopping the Lady Pirates again, this time on a Jenna Evans kill, Gates County scored on Bond’s serve to close within 14-8.

The teams exchanged points until senior Erica Bradley had two blocks on a single point to close the gap to 17-10.

Perquimans, however, started to pull away again, scoring eight of the next 10 points to lead 23-12.

Hoskins scored three straight times on her serve to close Gates within 23-16. Bradley added a block moments later to make it 24-18, but Perquimans closed out the first game with a 25-18 win.

The second game started little better for Gates as the Red Barons fell behind 3-0, but a missed serve by Perquimans gave the home team new life.

Bond took the serve and rolled off three straight points, one of which came on a Burgess kill, as Gates surged ahead 4-3.

The Lady Pirates, however, rallied back to take a 6-4 lead before a block by Burgess sparked Gates. Hofler recorded a kill on the next point – a serve by Caitlin Sawyer – and the game was tied at 6-all.

Perquimans again edged ahead, but Burgess helped rally Gates County. She had a tip to end the Pirate run and then served an ace to tie the game at eight-all. Moments later, Bradley had a kill and then rolled off two straight points on her serve – one coming on a Hofler kill – to give Gates an 11-9 lead.

Bond recorded a kill and a block and Hoskins added a point on her serve to keep the Red Barons ahead by two (14-12).

Burgess had a kill that turned the serve over to Bond, who added a point on a Bradley block as Gates took a 16-13 edge.

Perquimans  wouldn’t go quietly as the Pirates scored five of the next six points to take an 18-17 advantage.

Burgess stopped the run with a kill and then Bradley had a block to make it 19-18. Burgess scored three straight points on her serve, including the Bradley block and an ace to give Gates a 21-18 lead.

Bond then had a block moments later to make it 23-20. After an exchange of points, Perquimans had two straight to close within 24-23, but Gates won the final point of the game on defense to win 25-23.

The Lady Pirates jumped out to an early lead again in the third game when they scored the first four points.

Gates rallied thanks to a kill by Bradley and a winning shot by Hofler as they closed within 7-5.

After another Perquimans rally, Gates closed within three points moments later when Bond had a winning shot and Hoskins served an ace to make it 11-8.

Unfortunately for the home team, the wheels seemed to come off after that. The Lady Pirates rolled off four straight points to take a 15-8 lead and never looked back as they recorded a 25-14 victory.

The fourth game of the match started with both teams battling. Bond had a tremendous start to the match with a kill and a service point that gave Gates County a 2-1 lead.

Evans added a tip and Sawyer’s serve made it 4-2 in favor of Gates County.

In fact, the Lady Red Barons got out to a 7-4 lead when Bradley scored, but Perquimans battled back to tie the contest at 7-all.

Evans had a dig to make it 8-7, but Perquimans won the next point and then rolled off 11 unanswered points thanks to the serve of Lady Pirate Rachel Phthisic. The run ended, but it didn’t take long for Perquimans to get the serve back and roll to the 25-10 victory.

East falls in opening round