Council has issues with contractor 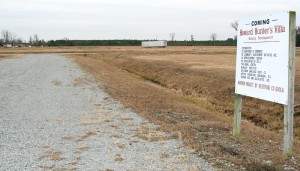 On Tuesday, a visit from United States Department of Agriculture (USDA) Rural Development Area Specialist Calvin Askew showed there is movement on the project in the form of three applicants that are in the process of securing loans to have homes built on the site.

Meanwhile, town council members expressed were adamant they wanted homes constructed and keys in the owners’ hands before the town paid for the pavement of streets for phase one of the subdivision.

The board agreed to pave the roadways for phase one of the project in a dollar by dollar reduction of the $130,000 the town owes to the North Carolina Department of Commerce.

Askew reported there are currently three applicants with a certificate of eligibility for USDA Rural Development funding.

“We have three eligible applicants and they’re ready to go, they’re in the process of being appraised,” he said.

Askew said the next step will be obtaining loans and closing on them.

The Howard Hunter Villas is intended for low-to-moderate income families. The USDA applicants, who had to prove good credit, will receive low-interest four percent loans for financing their home. In Hertford County, Askew said the most an eligible applicant can qualify for is $144,200.

Askew noted that the agency’s funding cycle is from October 1 to September 3 and that he hoped the loans will be closed in 60 days or less.

Council member Sarah Wallace asked who the contractor is on the project.

Wallace asked if the contractor was given a time limit on completing the homes.

“You’re familiar with the project a little bit now, we’ve been trying to close it out and we’ve been back and forth,” said Council member Bill Theodorakis to Askew. “Is QUOLA (Herford County Quality of Life Association) involved with this at all?”

Askew responded yes, QUOLA is part of the subdivision and would be selling the land to the applicants and USDA Rural Development would be providing the loan.

Wallace asked how the contractor was selected.

Askew said it was his understanding that Kee was authorized through QUOLA to build the first five homes for the Villas property.

“We’ve been told that seven years ago and we have not had a house out there yet,” said Wallace.

Town Attorney Buddy Jones asked what USDA was looking for the town of Murfreesboro to do.

Askew responded getting the streets paved.

Theodorakis voiced concerned about the lack of a timeframe on the project, noting it could be another several months before homes were completed on the property.

He said the council was at the point where they would agree to pave the roads when they saw homes completed, keys in the hands of the owners and the owners walking into the homes.

“The problem I have is if it’s going to be six months to a year or whatever after that—I’m not in agreement,” he said. “We need to do something different and that’s where I stand. We need to set some kind of concrete timeframe.”

He added Askew was just getting involved whereas the town had been involved in the project for 12 years.

“And some of the players involved that I hear right now I’m not…” said Theodorakis.

“Comfortable with,” Wallace chimed in, apparently finishing her board colleague’s sentance.

Murfreesboro Town Administrator Lee Capps presented an email from Vickie Miller, Assistant Director for the Division of Community Assistance (DCA) of the Department of Commerce.

In the email she asked the town to provide DCA with “specific” information regarding the following in order to close the community development block grant (CDGB) for the Villas project:

1. The cost estimate (with supporting documentation) for completing the proposed street to DOT standards;

2. Current information (with supporting documentation) regarding the number of contracts in place from USDA;

3. Current information (with supporting documentation, if they exist) of communication between the Town and USDA and the Town and QUOLA regarding this proposed transaction; and

4. Proposed timeline for completion of houses (with the houses being both constructed and occupied by low and moderate-income households) in order to close-out this project.

Capps noted, upon checking with Public Works Director Gene Byrd, that the town does have engineer drawings of the street with portions that are specified to DOT standards.

“If we go forth that would be us, we would do that, we would not need a third party to do that,” he said. “That’s the recommendation (to pave the roads) from Mr. Byrd.”

As for the second piece of information requested by Miller, Capps said the council had just heard from Askew with USDA Rural Development.

“Number three, there is no supporting documentation between the town and USDA and QUOLA,” he said. “It appears every agency is doing what it is responsible for doing.”

Capps said the proposed timetable is around 30 to 60 days for the loans with the conclusion of the contracts around April to June for certain conclusion of having the CDBG closed.

Capps concluded he planned to respond to Miller with a summary of what was presented in the meeting.

Mayor John Hinton said it was his understanding this matter would not prevent the town from filing for another CDBG in the future.

“That is my understanding,” said Capps.

Hinton asked if the town had that in writing from Miller.

Capps said Miller hadn’t responded with that in writing and that there was no CDBG project pending.

“I would like to see it in writing,” said Hinton.

Theodorakis noted that the council was and had tried to establish a timeframe, but ultimately didn’t have any say-so in the project to do so.

He continued by saying that it was agreed that $130,000 would go toward paving.

“If it paves up to the first section—that’s it—we’re done,” he said.

Capps said his recommendation would be to close the grant down, to get the monitoring report from Miller and to “cut the check.”

“My problem is not with the applicants and the funding, my problem is with the contractor,” said Wallace. “He’s already been paid thousands of dollars and he’s done nothing.”

Theodorakis said he believed the town had a reliable partner with USDA.

Askew said he believed once the funding was in line the project would move ahead.

“We’re moving on, once we meet that (loan) obligation that means the money is locked in place, we close and we’ve got the contract,” he said.

Askew said USDA would work with the town in whatever way they can.

“I think you can appreciate our apprehension because most of our children have grown up since we first started this and there’s still not a house out there,” said Hinton.