Gates Co. advances to round two

GATESVILLE – Communication and movement are key in volleyball.

Friday afternoon Gates County High School got both in their opening matchup in the North Carolina High School Athletic Association 1-A playoffs. The result was a straight-set victory over visiting South Creek High School. 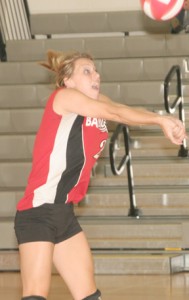 “I think we talked well and moved well today,” GCHS Head Volleyball Coach Jennifer Dean said. “We also did a good job of keeping the momentum going our way.”

“I thought we did a good job covering the floor and communicating,” she said. “I also thought we played well at the net.”

“We were moving the entire game,” agreed Lady Baron senior Monica Bond. “I think that was important for us.”

Gates County wasted little time getting out of the gate strongly as they rolled to a 25-15 win in the first game. They followed that with a 25-20 victory and then closed out the contest with a 25-15 win.

With the first set in the book, Gates County came out strong in game number two thanks to Bond’s serve. The senior right-hander rolled off five straight points with two of those not returned. Jenna Evans took care of another point with a kill and Gates led 5-0.

South Creek rallied to within 5-3 before a Kirby Hofler dig on an Evans serve gave the Lady Red Barons a 7-3 advantage.

The Lady Cougars weren’t deterred, however, and rallied to take a 10-9 lead.

Erica Bradley stopped a four-point run by South Creek with a tip, but the Lady Cougars came back with four straight again to lead 14-11.

Evans, however, had back-to-back kills and Bond rolled off seven straight points on her serve including two aces and a pair of others that were not returned. Evans added another kills during the spurt and Bond had a dig that was key in keeping the run going.

South Creek got as close as one before Danielle Adams blasted a kill down the center of the court. Sawyer then recorded a point on her serve to make it 23-17.

Bradley added another kill for point number 24 and then a serving error gave Gates County its final point for the 25-20 win.

Gates fell behind 1-0 in the third set, but Evans recorded a dig and a kill on the same point to even the match. Bond then scored on her serve to make it 2-1.

The teams exchanged the serve for several points and then Adams took control of the match, scoring three kills in four points to push Gates County ahead 7-4.

South Creek closed within one at 8-7, but the Red Barons got the serve back and Hofler made the most of it. She rolled off five consecutive points – one coming on an Evans kill – to push the GCHS lead to 14-7.

Moments later, Adams and Bradley combined to block a shot that had Gates County’s lead up to 20-12.

On the next point, however, misfortune struck Gates as Adams rolled her ankle on the play and had to actually roll her body off the court during the point. She was helped to the sideline and did not return.

Bradley, however, stepped up with a kill and two service points to  help close out the contest with the 25-14 win.

Despite getting the win, the Lady Barons are in a tough situation for Tuesday’s second round game. Bond played Friday after sitting out the Tar-Roanoke Conference tournament championship with a hip injury, but was only about 50 percent.

“She actually injured her stomach yesterday in practice and already had the hip problem,” Dean said. “She’s giving us what she has, but today I had to play our defensive specialist for Monica on the back row because she just couldn’t go.”

Bond said she would give her team her all.

“I’m going to give them everything I have,” she said. “The pain is pretty constant, but I’m going to play as much as I can.”

Dean also said she wasn’t sure of Adams’ status because of the ankle injury.