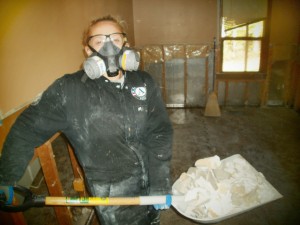 An AmeriCorps volunteer helps to clean out a flooded building in downtown Windsor. Contributed Photo

WINDSOR – Among the many with their hands dirty cleaning up Bertie County was one group of people whose daily lives are centered on help.

A team from AmeriCorps, who were working diligently to make North Carolina’s parks safer, was called from that duty to come to Bertie County in the aftermath of flooding caused by the remnants of Tropical Storm Nicole.

“We were the first team to do emergency response this year,” said Team Leader Alix Collins. “We have helped people however we can in their efforts to recover from the storm.”

Collins said the team had worked to remove items from the Windsor-Bertie County Chamber of Commerce building and also aided the organization in setting up their temporary office.

In addition, they worked in the law offices of Pritchett and Burch as well as gutting a pair of homes that were flooded.

Rebecca Masino of Mt. Laurel, New Jersey was one of the team members. She said the group’s goal was simply to be there to help.

“We’ve been making ourselves available to help people get back on their feet after the floods,” Masino said. “Whether we were organizing files at a law firm or mucking and gutting someone’s home, we just hope to take the burden off the people of Bertie County whenever and wherever possible.”

Jesus Vaughan III said the work was a different experience for some of the group.

“We have been helping clean out the flooded homes in Bertie County like taking down walls, floors, carpets and doors,” Vaughan said. “It was a new thing to learn for some of us.”

The group was invited through the Hive in Lewiston-Woodville and specifically by Vivian Saunders. At least one of the team members said Saunders had made the trip special.

“Getting to meet Ms. Vivian has been great,” said Michelle Clifford of Syosset, New York. “She makes us every meal which is a big deal for us because we have been cooking all of our own food. She calls us her ‘babies’ and makes us feel so welcomed and appreciated.”

The theme from the group was the friendliness and appreciation they felt from the residents of the county.

“We’re here to do whatever we can to help people get back into their homes and businesses,” she added. “The people we have worked with have been so nice and so appreciative.”

“I think the most interesting thing here is how everyone knows about us and that we’re here,” Shea said. “This community is so kind and thankful and the whole community treats us like family.”

“The most interesting thing about being here is how nice everyone has been to all of us,” agreed Marilu Duchemin of California.

Others said they were surprised just to see the after affects of the storm.

“The most interesting thing that happened to me here was when I saw the effects of the flood and all the damage it did,” said Drew Schaffer of Norwalk, Ohio. “I had never seen the effects of a real disaster like this in person and it really had a sobering effect on me.

“I realized that one can never truly understand the scope of a disaster without being here,” he added.

The AmeriCorps team left Saturday, but plan to return for another week of work this coming Monday. The group had to return to Mississippi for training for their next project.

Collins said she would be giving information to Windsor-Bertie Chamber Executive Director Collins Cooper about requesting an AmeriCorps team when the rebuilding process began.

She said those involved in AmeriCorps had a genuine interest in helping people and making America a better place to live.

AmeriCorps is an opportunity to make a big difference in a person’s life and in the lives of those around them. It’s a chance to apply skills and ideals toward helping others and meeting critical needs in the community.

Each year, AmeriCorps offers 75,000 opportunities for adults of all ages and backgrounds to serve through a network of partnerships with local and national nonprofit groups.

“I wanted to be part of AmeriCorps because I wanted to help out the community and help people that really need it,” said Myron Dean of Orange Park, Florida.

“I joined AmeriCorps after hearing stories from friends who were in AmeriCorps NCCC,” said Korey Micheal Gaddis of Kennewick, Washington. “The program involved travel and helping others, something I’ve always wanted to do.”

Kyle Ducharme of Northbridge, Maine said the experience was one that would help long-term.

“I chose to be part of AmeriCorps because it gives me the opportunity to serve those in need in our country,” he said. “I also want to establish a non-profit in the future and I believe AmeriCorps will give me the necessary experience as well as help me network with existing non-profits.”

While many in the AmeriCorps team may have seen devastation from flooding for the first time, that wasn’t the case for Jessica Corcoran of Mount Vernon, Iowa.

“I experienced the effects of disaster in my own home during the Midwest flooding in June 2008,” Corcoran said. “AmeriCorps responded to that disaster and helped my community.

“I chose to take this year after my college graduation to give back to the program that I saw help so much,” she added. “I have a passion for helping others and AmeriCorps NCCC was the perfect fit for me.”

That passion and those of the other team members was important, according to Cooper.

“They have been a blessing to this community,” Cooper said. “We have received so much help because of their attitude, their willingness to work and their passion for helping the people of Bertie County. We owe them a debt of gratitude.”

WINDSOR – The Windsor Fire Department is moving forward with the purchase of a new mini pumper with the blessing... read more