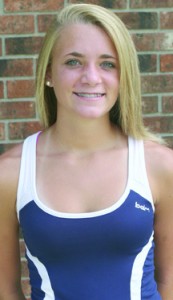 The wins started at the top where Caroline Bowman downed Renae Parsain 8-1 and then second-seeded Alex Riddick downed Alyson Owens by a final count of 8-0.

In doubles action Bowman and Riddick defeated Parsain and Owens 8-5 in the battle of the top seeds while Futrell and Bryant took the number two matchup 8-1 over Tyler and Miller.

Daniels and Quattlebaum completed the sweep with an 8-2 victory over Eason and Walton.