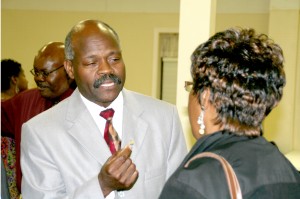 John Horton (left), a 24-year veteran on the Hertford County Board of Education, speaks with a local citizen following last week’s candidate forum held at the Ahoskie Christian Center. Horton is among six hopefuls seeking three seats on the school board during the Nov. 2 General Election. Staff Photo by Cal Bryant

AHOSKIE – Views, values, vision….those three items were shared here Tuesday night during a forum held for the six candidates vying for three seats on the Hertford County Board of Education.

Deloatch and Horton are school board incumbents. Williams ran unsuccessfully for a seat on the board in a previous election. Brown, Holley and Porter are all political newcomers.

In laying out the ground rules for the forum, Rev. Smith gave each candidate eight minutes to make an opening statement. After a short break, each candidate answered pre-determined questions.

Brown led-off the forum by informing the audience that both she and her husband were products of the Hertford County Public School system, each graduating from Ahoskie High School in 1987.

“The school system did exactly what it was supposed to do, preparing (husband) Bobby for a career and preparing me for college,” Brown said. “I’ve been in public service ever since I came out of college.”

“I have a vested interest in seeing this school system thrive,” she said.

Brown added that education has always been the main focus within her household.

“Learning styles are different and I’ve watched our teachers address those different styles; that’s a very difficult thing to do,” she stated. “Reading is very important; once you teach a child to read they are able to excel in other areas.

“I don’t think a school system teaches a child what to think, it teaches them how to think,” Brown continued. “It teaches them conceptually how to work in a system and how to learn the skills they need for life.”

Brown stressed her values lie with family, the community, education and public service. The latter is where she is employed as a state worker in community development.

Deloatch, currently ending his first term on the local board of education, touted his vast experience. He has served in nearly every facet of public education during his 37 years in the county – teacher, assistant principal, principal, director, executive director, superintendent and now a school board member.

“We have great children here in Hertford County and I’m just proud to have been a part of their lives,” Deloatch said, adding that he and his immediate family were products of the local school system.

“Every child that comes through the door deserves the best education possible,” he continued. “Our children deserve to have highly qualified teachers. I’ve helped with that thanks to our partnership with Nucor to work to have our teachers nationally board qualified and our effort to have a housing complex built for our teachers. That was important because 35 percent of our teachers were leaving every year. The housing complex is attracting teachers that are staying here.”

Deloatch said it was the responsibility of the school system to educate children and that each student was deserving of a safe and nurturing environment.

“Our students need to be free of gang activity, violence, bullying….if kids are not safe, they cannot learn,” he noted. “Our middle school kids and high school kids need to be nurtured as well. It starts at the elementary level and goes all the way up.”

Choices are also important to Deloatch, saying the local students need to have the opportunity to attend the county’s Early College High School or seek a traditional education.

With a background in male mentoring programs, Holley said he has a genuine concern for the local community, including the system of public education.

“All students can learn,” Holley stressed. “Hertford County has proved that by having a low (drop out) rate. They want to stay in school and learn.”

Holley said in order to meet the growing demands for employment in a global market, as well as socially and emotionally, he noted the importance of advancing technology within Hertford County Schools.

“Our children should also engage more in reading and math,” he stated. “I see so many of our young people not academically prepared in reading and math. I believe someone, somewhere along the way dropped the ball on these children. But there can be a change.”

Holley also touched on the school budget, saying it must reflect the “needs of our children and teachers.”

“There are so many times that teachers use their own money to support their classrooms,” Holley remarked. “We need to delegate more money to our classrooms.”

He also saw a need for additional support from the community to assist with the education process.

“Through public support and collaboration, we can make a difference in Hertford County,” Holley concluded.

Horton is the senior member of the Hertford County Board of Education, now serving his 24th year.

“With my experience comes wisdom as I’ve seen us come a long way during my years of service,” Horton said. “Next year you will really need some experience on that board. Some very hard decisions will have to be made because of projected shortfalls in the state and federal education budgets. We’ve got to find a way to have the biggest bang for the bucks we do receive.”

Horton said some had asked why he chose to seek another term.

“It’s definitely not for the money,” he quipped. “It’s about love…love for your county. I love the citizens of Hertford County, but more importantly I love the young boys and girls of Hertford County. To be an effective visionary on the school board you’ve got to love it for someone else. If you are serving for the accolades of the office it’s not worth your time. If you serve to have an impact on the education of children, there’s no greater position in Hertford County than being on the school board.”

Horton said among the landmark decisions he’s been involved in over the years included having safe and secure schools (resource personnel, certified police officers, at every campus) and the dress code policy.

“When you cast your vote, keep in my experience in budget and accounting,” Horton closed. “You need someone on that board to guard the finances to ensure our children do not come up short. You cannot learn without the necessary resources. You need someone who knows what it’s like to sit down at the table with the (Hertford County) commissioners to let them know and understand what is needed to adequately fund our schools.”

Porter, a native of Cofield and a 1970 graduate of C.S. Brown High School in Winton, is no stranger to public education at the local level. She taught kindergarten and 3rd grade at Ahoskie Graded School (now Ahoskie Elementary). After receiving a Master’s degree in Elementary Education from East Carolina University, she climbed the ladder locally, gaining the position of assistant principal at Hertford County Middle School. There she later became principal, retiring from that position. During her career she was named HCPS Teacher of the Year (1998) and Principal of the Year (2004).

She said her time as a student, parent, teacher and administrator within Hertford County Public Schools has given her various prospectives.

“It also allowed me to become a good listener, a team player and a person who focuses on reaching goals and objectives that have improved our system of education,” Porter said.

She continued, “I’m very serious about the education of children in Hertford County Public Schools. I’m seeking a seat on the Board of Education because I have a genuine concern for the children of this county. We need to provide them with the best education possible so our children will become good and productive citizens, wherever they may go.”

As a courtesy, Rev. Smith read a prepared statement from Williams, the father of two HCPS students, a portion of which is as follows:

“I have a vested interest in public education. Our children’s education is an investment that will pay dividends. I am prepared to execute a more profitable education for our children’s future. My leadership will provide initiatives that will challenge us to incorporate quality education for our children. Advanced technical, digital and computer science resources; infrastructure improvements; additional staff development; greater security measures; and educational collaboration with our local colleges and businesses are some of the strategies I will implement if I’m elected.”

GATESVILLE – Champions have heart. They win when they don’t have their best game and when they face adversity. The... read more