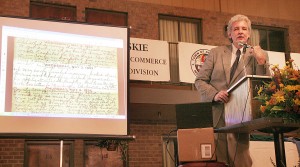 Noted historian and author Marvin T. Jones discusses one of his rare finds (as displayed on the screen) during last week’s Ahoskie Chamber of Commerce Banquet where he served as the guest speaker. Staff Photo by Cal Bryant

AHOSKIE – From Winton, to Cofield, to Ahoskie and around the world, the globe-trotting Marvin T. Jones took his audience on a historic journey here last week.

Jones, a Hertford County native now residing in Washington, D.C., was the featured speaker at the annual Membership Banquet hosted Oct. 14 by the Ahoskie Chamber of Commerce. That festive event, held at the Ahoskie Inn, included a social hour, silent auction and the presentation of several awards.

Through years of extensive research, Jones currently boasts of over 4,000 items (photographs, documents, maps, audio and video recordings) that are part of the Chowan Discovery Group (CDG), of which he serves as Executive Director. The mission of the CDG is to research, document, preserve and present the 400+ year-old history of the landowning tri-racial people of color of the Winton Triangle, an area centered in Hertford County.

Prior to presenting his local history, Jones used a slide show of his award-winning and magazine quality photojournalism that detailed his many “shoots” here in the United States and in foreign counties. While many of Jones’ works have been published, one of his claims to fame was a major photo spread on the country of Haiti printed in National Geographic.

His photographs of Somalia were part of an exhibition at Howard University. That same exhibition will also be shown locally at Roanoke-Chowan Community College.

Jones is also on demand as a lecturer at historical, cultural and educational functions.

“I grew up enjoying the Hertford County sunshine and I still enjoy it today during my travels back home,” Jones said as he flipped through a series of photos, some he snapped and others that are part of his vast collection, detailing life on his native soil.

Tracing his photography roots back to his days at Ahoskie High School (a 1970 graduate where he was part of the yearbook staff) as well as “shooting” for the News-Herald, Jones said he developed a passion for this type of art form. He later tried his hand at medical photography while in college.

His expertise with a camera in hand led Jones to contracts with business, industry, interior design firms, the D.C. Lottery and government entities. Jones has photographed famous politicians and movie/TV stars.

Jones has been called upon to provide photographic services in foreign lands, including Iceland, Mexico, South America, Cuba, Haiti, Ethiopia and Somalia.

However, despite his globe-trotting life, Jones said there’s no place like home.

“I’m here in Hertford County at least once a month,” he said.

Even in his current home in D.C., Jones remains connected to his native land thanks to his development of the website, roanoke-chowan.com. There, visitors will find stories and photo essays.

“That allowed me to re-connect with a lot of people, make a lot of friends, cross racial lines,” Jones noted. “Through that website I’ve met people from across the country, but they grew-up here.”

That site also attracted others like him – genealogists and historians. It also sparked several burning questions from within his soul.

“Why was the community I grew up in the way it was,” Jones pondered. “Why have people of color been landowners for so long? What made us different than other areas of the South? Why do we have such an unusual racial mix? Why is Hertford County a greater place than others I know of?”

For answers, Jones dug deep into the history of what he calls “The Winton Triangle” – the areas of Winton, Cofield, Ahoskie and even as far west as the St. John community.

“What I found was a much different story, one detailing a tri-racial mix not found in other areas of the South or found, for that matter, in eastern North Carolina,” Jones said.

Among the keys to that uniqueness, Jones said, was that people of color here locally were literate long before the Civil War. He referenced Alice Nickens, a Hertford County legacy who just recently died at the age of 106. Among his vast collection of artifacts is the diary of Nickens’ mother, one that gave Jones a “first person” look at life in Hertford County.

“Those diaries contain some important facts and events that occurred in the Winton Triangle during her lifetime,” Jones noted.

He touched on the legacy of C.S. Brown, famous for the school (the old Waters Training School) in Winton that now bears his name.

The presence of Waters Training School in Winton meant people of color were able to receive an education at home. Prior to the opening of that school, blacks were forced to attend Shaw University (Raleigh) or Hampton (Va.) University just to receive a high school education.

Jones’ research led him to find that the Winton Triangle was established in the 1740’s. At that time, he said, people of color were a mixture of Europeans, Indians (particularly from Pocahontas’ father’s empire), Africans, Gypsies, Jews and even those from India were part of what he called a “giant melting pot of those living in the Chesapeake Bay area.”

“Some of them moved into what is now Hertford County and purchased land,” Jones said. “The first two I have documented were Thomas Archer, who established Archer Town in the 1740’s, and William Weaver, who brought property near what is now Beechwood Country Club. I’m descended from William Weaver, whose father was from India.”

A deeper look into Hertford County’s vast history revealed that Jones was also descended from the Choanoke Indians.

“The English first heard of the Choanoke people when they came to Roanoke Island in 1584,” Jones noted. “We all know of the history of that first attempted English settlement on Roanoke Island, but there were other expeditions as well, one in 1586 that came through the Albemarle Sound and eventually made its way up the Chowan River. There the English found a large number of Indians – the Choanokes living along the river in a settlement that then was about the size that Winton is today. It was the largest Indian town in coastal North Carolina at that time.”

In closing, Jones asked for help and partnerships with his ongoing research. He can be contacted through the website. He also promoted his new book – “Genesis – Beyond the Color Line.”

Remarks were also made by Dan Joyner, President of the Ahoskie Chamber, and Jerry Castelloe who serves as Chamber’s Executive Vice President.

FEMA officials will set-up offices in Windsor and Winton to assist owners and renters of residential property as well as... read more