They win when they don’t have their best game and when they face adversity. 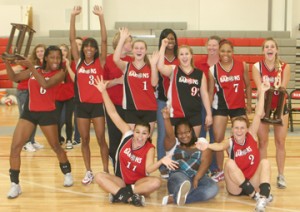 Still, the Red Barons managed to pull together and won the Tar-Roanoke Conference tournament and, in so doing, added the tourney hardware with their regular season title.

Gates County, seeded number one in the TRC tournament, defeated second-seeded North Edgecombe in four games to earn the tournament title. The Red Barons won by counts of 20-25, 25-19, 25-20 and 25-11.

“It was definitely not one of our better matches,” Dean said afterwards. “I’m pleased we were able to work through it.”

In improving to 21-2 overall, the team secured a number one seed in this week’s North Carolina High School Athletic Association 1-A playoffs.

“We’ve done well overall,” Dean said. “We’re excited about the playoffs and seeing what comes of that.”

Bond was out Thursday due to injury, but is expected back for the post-season play.

North Edgecombe made it clear early they weren’t intending to simply roll over for Gates despite the Barons being undefeated in league play. The Lady Warriors fell behind early, but rallied to win the first set.

Jenna Evans started things well for Gates with three straight serving points. Two of those came via kills – one each by Danielle Adams and Erica Bradley.

Later in the game, Gates led 5-2 when Lauren Burgess got back-to-back serving points thanks to an ace and  a Kirby Hofler kill. Hofler added another kill moments later to put Gates ahead 8-3.

North Edgecombe  rallied back to within 10-7 and steadily climbed closer into the contest, eventually cutting the Gates lead to 16-14.

Hofler, however, appeared to have the Barons back on track when she served three straight that were not returned, including an ace to give Gates County a 19-14 lead.

The wheels came off at that point, however, and North Edgecombe scored 11 of the next 12 points to take the first game 25-20.

The Red Barons fell behind early in the second game as well, but rallied thanks to the serve of Jasmine Raynor. The senior delivered an ace to tie the game at eight-all and then recorded two more service points to make it 10-8.

The Lady Warriors came back to tie the game at 10-all, but a Hofler dig followed by a tip from Bradley gave the serve back to Gates. Evans made the most of it, serving two straight points to help Gates County lead 13-10.

Sitting at 15-13, Gates County had a key point on which both Raynor and Caitlin Sawyer recorded digs to make it 16-13.

Adams added a kill moments later and then Sawyer scored two points on her serve to make it 18-15. Hofler and Bradley added kills that helped Gates take a 22-18 advantage with the ball in Evans’ hand to serve.

Adams then had three kills in four points to help Gates grab the 25-19 win.

With North Edgecombe taking an early lead, the Lady Barons roared to get back into the contest.

Adams had back-to-back kills followed by another from Hofler and a winning tip by Burgess to give the Barons a 4-3 edge.

The game remained close throughout the contest with Crystal Hoskins, Evans, Hofler and Bradley all having kills that kept Gates County even.

With the score deadlocked at 15-all, Evans had three straight service points – one coming off a Bradley kill – to push the lead to 18-15.

Three points was as close as the Warriors got as Hofler added a pair of kills down the stretch and Bradley recorded a key dig to give Gates a 25-20 win.

The fourth set started well for Gates County as Evans, Adams and Hofler recorded early kills to give the Barons a 4-2 lead.

As North Edgecombe tried to rally, Evans had three straight kills and Burges recorded five unanswered points on her serve to push the Gates lead to 10-4.

The Lady Warriors stopped the run, but Hoskins had a kill that was followed by a service points from Sawyer to make it 12-6.

Moments later Hofler took the serve and rolled off four unanswered points with two of the serves not returned.

Raynor had a pair of aces later in the match to push the lead for Gates  to 22-9.

Fittingly, the Barons finished the match off with an Adams kill as they took the set 25-11 and secured the tournament championship.