In a rebuilding year with only freshman and sophomores on the varsity  roster, Lawrence Academy’s volleyball team has kept working diligently. 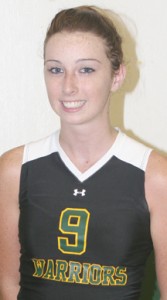 Despite suffering setback after setback, the team kept practicing and improving.

That effort paid off last week when the Lady Warriors topped Northeast Academy three games to one to secure their first victory of the season. Lawrence won by counts of 25-16, 21-25, 25-17 and 25-16.

“I’m pleased with the way the girls have kept battling and it was nice to see them get to experience a win, especially since it came in conference play,” said fifth-year Lady Warriors’ mentor Dr. Ed Clouse. “We’re a very young squad and we’re continuing to learn the game.”

Sophomore Holly McNair led Lawrence with 13 kills during the afternoon. That went along with four aces and one dig. Hayden Thompson added seven kills and five aces along with a single dig.

Kim Northcott was solid serving, hitting good on 21 of 24 serves including 10 aces. She added 17 assists during the match. Heather Hughes added two aces and two digs.

The win helped Lawrence improve to 1-17 overall and 1-11 in the league.

Giovanna Conigliaro led Lawrence with three assists, two aces and one kill while Sydney Brabble added two aces and a kill. Taylor Wilson contributed six assits and one ace and Chelsea Ginn had an outstanding afternoon with five kills and three aces.

Olivia Hoggard added two aces and a kill for Lawrence.

The jayvee team improved to 4-11 overall and 3-7 in Tarheel Independent Conference play.