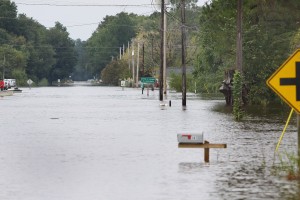 Numerous homes and businesses along this stretch of US 13 North in Windsor, near the intersection of Hoggard Mill Road, were damaged when the Cashie River overflowed its banks due to five consecutive days of heavy rain. Photo by Bruce Ramsey / Tar Heel Studio

WINDSOR – The official word is – there is no word.

As of late Wednesday afternoon, Bertie County officials were still waiting for official notification of a federal disaster declaration.

Unfortunately for those adversely affected by flooding in the county, there is nothing officials can do but wait for President Barack Obama to officially sign the declaration.

Over the weekend, North Carolina Governor Bev Perdue received information about the damages done to homes and businesses throughout Bertie County, centered heavily in the Windsor area. Upon receiving the information, she officially requested a disaster declaration from the federal government.

“The governor has officially requested the declaration, but we have received no word that it has been signed,” Freeman said. “We’re waiting, just like the other five counties.”

Freeman said once the federal disaster declaration is signed, FEMA will set up an office at the Bertie County Council on Aging Office on West School Road.

“Once they have made the official declaration, FEMA will set up at the Council on Aging office and be there to offer financial assistance to those who were adversely affected by the storm,” Freeman said.

He said there was no information on any possible buy-outs because of Windsor’s second major flood in 11 years.

“That is something that FEMA will assess once they are on the ground in Bertie County,” he said. “We have no way of knowing if buy-outs will be offered until they are here and have an opportunity to assess the future situation.”

The Emergency Management Coordinator said cleanup efforts are underway and seem to be going well. He reminded those who have debris to remove that it should be placed on the state right-of-way no later than October 20.

“We want to give people plenty of time to get the debris out on the road,” Freeman said. “We do, however, want to make sure we pick it up just one time and be as cost-effective as possible in our cleanup efforts.”

Board weighs options on flooded facilities

WINDSOR – Moving on. The Bertie County Commissioners began the process of doing just that here Monday morning. During their... read more