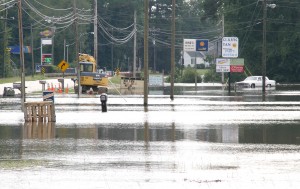 Businesses along NC 42 near the Ahoskie Creek were flooded during a storm that last nearly one week. Estimated property damage to residences and businesses in Hertford County stands at $269,603.

An estimated quarter-million dollars-plus worth of property damage is being reported in Hertford County resulting from a week-long weather event (Sept. 26 – Oct. 1) that dumped upwards to 24 inches of rain.

Smith said 26 residences were affected by the flooding, causing an estimated $149,778 worth of damage.

Smith added that he was still awaiting word on whether or not Hertford County would be declared a federal disaster area.

Late last week, Smith released the amount of damage inflicted by the storm on Hertford County crops….an estimated loss in excess of $2.5 million.

Cotton was affected the most by the heavy rainfall. The reported cotton crop loss, spread out over 13,729 acres, was estimated at $1,129,637.

Soybean losses were estimated at $312,296. Hertford County farmers combined to plant 13,346 acres of that crop this season.

The report also revealed approximately 110,000 Perdue chickens were lost due to the weather.

Additionally, the repair estimate for drainage pipes, roadways, and ruts in washed through fields was $30,000.