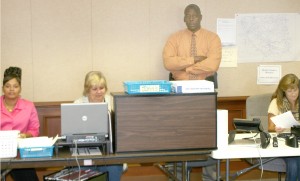 Bertie County Sheriff John Holley stands while members of his office staff carry out their duties despite being relocated to the commissioner’s room because of flooding. Working with Sheriff Holley are (from left) Angela Bond, Audrey Jernigan and Sheree Barmer. Staff Photo by Thadd White

WINDSOR – In bad conditions you do what you must to serve and protect.

That’s how Bertie County Sheriff John Holley said he is approaching the current situation he finds his office facing.

“The waters flooded the duct work in our office and went over an electric panel,” Sheriff Holley said. “We had already moved the 9-1-1 Communications Center to the Windsor Fire Department for the duration of the storm, but couldn’t get back into the office because of the flood damage.”

Monday morning, the sheriff found out he wouldn’t be able to return his staff to the office at all until repairs were done.

“We made sure the 9-1-1 Center was available throughout the storm and now, afterwards, by moving it to the commissioner’s room,” he said. “We made sure we were available to serve our citizens.”

Sheriff Holley said his officers were out in force during the storm aiding the victims. They helped remove citizens who needed to flee their homes and made checks throughout the county.

“We put all of the officers on standby and some who were off-duty came on in to assist,” he said. “They worked tirelessly and I can’t say enough about how much they did for the citizens.”

After all of that effort, the officers returned to find nowhere to work because of the damage to the building, but didn’t complain and moved quickly into the new office.

“No one complained,” Sheriff Holley said. “They know we have a job to do and we’re going to do it from wherever we need to. “

The sheriff said he hoped to return to his office in two or three weeks.

While the main sheriff’s office was damaged, the annex used by the detectives had water standing in the building. Detective Sgt. Ed Pittman said several case files were lost due to the flooding.

On Monday, he received permission from the Bertie County Commissioners to have some of the files dried and restored. Other files, he said, had already been given to the District Attorney’s Office. The DA has agreed to send copies of those files to Bertie County.

Also being moved are the Bertie County Magistrates who are currently working from the Bertie County Courthouse. Probation and Parole has also moved. They are on the second floor of the courthouse in the office nearest the elevator.

I could be a Republican, but frankly I don’t have the pessimism required. If you listen to the die-hard Republicans... read more