Picking up the pieces in Windsor 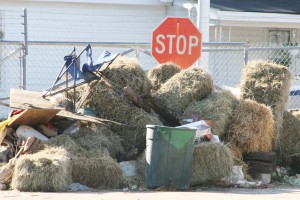 Scenes such as this one are repeated throughout the Town of Windsor where clean-up is now underway from last week’s flood. Staff Photo by Thadd White

WINDSOR – Cleanup is under way in this central Bertie County town.

Citizens have begun the work of cleaning out all of the flooded buildings in Windsor and starting the process of rebuilding.

Owners of downtown business were busy removing furnishings, carpeting and any other items that were ruined by the flood waters, while companies specializing in disaster clean-up are busy drying out buildings throughout the town.

Staff members were busy at the Windsor-Bertie Chamber of Commerce trying to salvage what was left of the facility which was flooded for the second time in 11 years.  This time the office saw three frrt of water standing inside the facility.

The chamber office is housed in the old Freeman Hotel Building, which is on the National Historic Register.

In September of 1999, the building was flooded like many others in town due to the waters that rose from the Cashie River after Hurricane Floyd. At that time, the building was completely restored to its original state.

Now, Windsor-Bertie Chamber Director Collins Cooper and his staff are working to move everything out to a temporary office on South Granville Street.

“It’s certainly sad to be doing this after what happened before, but we’ll be back,” Cooper said. “We were able to save quite a few things this time and, hopefully, we’ll be moving back in before we know it.”

Until such time as the Chamber can return to its office on North York Street, it will be operating from one of the incubator buildings owned by the town. It will be located at 121 South Granville Street.

“We hope to be open in the next few days, but especially by the weekend,” Cooper said.

In addition to the flooding of the building, the entirety of Livermon Zoo and Park were under water following last week’s rains. While most of the animals were able to be moved to safety, some were lost in the waters.

“We lost our oldest buffalo, which drowned during the storm,” Cooper said. “We certainly hate that it happened, but we will be looking to replace the buffalo and the few birds that we lost when we get to the point of the park being opened.”

Cooper said he appreciated the help of Chamber Board member Vivian Saunders and the volunteers from the Family Resource Center who were helping work on cleaning out the facility.

While the Chamber office is moving to temporary digs, the Lawrence Memorial Library staff continued the work to clean up that building. Hundreds of books were being discarded Monday and Tuesday after they were destroyed in the flooding that rose to three feet inside the facility.

In addition to staff from the Lawrence Memorial Library, the Windsor branch was receiving assistance from the staff of the Albemarle Regional Library and volunteers from the Kelford-Roxobel Roving Library.

The Windsor Rescue Squad Building was also being cleaned out as rescue squad members try to recover from the four feet of water that took over that structure.

Work is also under way for many whose homes were destroyed during the flooding as well as with those who are busy cleaning up their businesses.

Two downtown businesses were open by Tuesday, however, as Bertie Sentry Hardware and Spencer’s Snack Bar were back in business.

In between the two, however, was the crumbling building which housed Elite and Sassy, a beautician in the town.