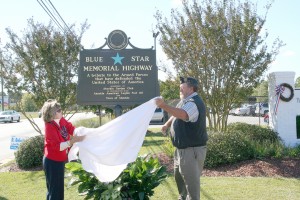 AHOSKIE—Since the 1940s, the National Garden Clubs’ Blue Star Memorial Highway program has honored those in the Armed Forces who have defended the United States.

On Wednesday morning, Ahoskie dedicated its own Blue Star Memorial Highway marker on U.S. 13 at the town line near Bojangles. The effort was sponsored by the Ahoskie Garden Club in cooperation with Ahoskie American Legion Post 102 and the town of Ahoskie.

Ahoskie’s Blue Star Memorial Highway marker is the 36th to be dedicated in the state of North Carolina.

Citizens and officials gathered at the dedication marker for a ceremony filled with prayer, speakers and music from the U.S. Fleet Forces Band from Norfolk, Va. Hertford County High School JROTC presented the nation’s colors.

Ahoskie Garden Club President Patricia Hughes said the process of acquiring the marker began about one year ago after the club learned about the Blue Star Memorial Highway program.

“The club was very, very excited about this opportunity to honor our men and women in uniform who give or have given of themselves for our freedom,” she said. “We voted to move forward and find a way to make this a reality.”

Club members reached out to American Legion Post 102 Commander John Bracy as well as the Town of Ahoskie for support on the endeavor. Cooperation from Bojangles and the North Carolina Department of Transportation secured a spot for the marker next to the Ahoskie gateway sign.

“We’re very proud of this accomplishment and we’re glad you’re with us today,” she said.

“After spending 30 years in the military, I can think of no greater honor for me then to participate in this Blue Star Highway dedication,” said Ahoskie Town Manager Tony Hammond.

Hammond noted that the most recent Blue Star Memorial Highway in North Carolina was dedicated by the Bermuda Run Garden Club on June 9.

“So, Ahoskie is joining a long list of communities that are doing this,” he said. “In naming this highway as a Blue Star Memorial Highway we are saluting our nation’s military, which includes more than 2.4 million men and women.”

Hammond concluded by thanking military families and those who are currently serving overseas.

“The blue star (on the marker) is a symbol of heroism that dates back to Alexander the Great in 363 B.C.,” she said. “The blue star symbol was used down through history and found its way into American history when President George Washington presented medals for exceptional bravery that contained a blue star.”

That tradition was continued by President Abraham Lincoln. Daber said the blue star symbol was once again used by a father of a soldier who was involved in World War I. The proud father created a banner, a blue star framed with a red border, and displayed it in the window of his New York City apartment. Blue stars soon became part of everyday fashion, worn by those who had a loved one serving in the war. The practice became popular once again during World War II.

Daber said in 1945, the Garden Club of New Jersey along with the New Jersey State Highway Department designated six miles of highway as a memorial to men and women who served in World War II. Eight thousand dogwood trees were planted and the roadway became known as Blue Star Drive. In 1949, the National Council of State Garden Clubs’ Blue Star Memorial Highway program was adopted and became an official project of the country.

Ahoskie Garden Club member Carole Everett and Bracy unveiled the marker which reads: “Blue Star Memorial Highway. A tribute to the Armed Forces that have defended the United States of America.”

“We dedicate this Blue Star marker to the honor and glory of all those men and women who have served, are now serving  and will serve in the Armed Forces of this great nation,” said Ahoskie Garden Club Treasurer Virginia Johnson.

Hughes said in the next few weeks club members will be placing plants, donated by ACE Hardware, around the marker.