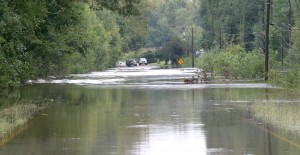 The North Carolina Department of Transportation has its hands full in assessing flood damage to local roads, including NC 561 East at Bear Swamp (shown here). Staff Photo by Cal Bryant

The water may be receding, but danger still lurks on local roadways, particularly in Bertie and Hertford counties.

The North Carolina Department of Transportation is now in the survey and assessment mode in regards to local roads and bridges after a recording-breaking 18-plus inches of rain flooded the area last week.

NCDOT Division I District Engineer C.W. “Winn” Bridgers of the Ahoskie office said a full survey will not be completed until the water has fully receded.

“We’ve still got some local roads still underwater in spots,” Bridgers said during a Monday afternoon interview. “In other areas were the water has receded, repairs are already underway.”

Bridgers said that by the end of the work day on Tuesday he hopes to have all site specific surveys complete.

“There are cases of washouts on the shoulders of paved roads and other cases where unpaved roads were washed out…those are the obvious items we are addressing as we speak,” Bridgers noted. “What we don’t know is the overall extent of damage to the roads and road beds where water still stands.”

Bridgers said of all his years with DOT, “I’ve seen water in places where I’ve never seen it before.”

He added that the bulk of road repairs will be in Bertie and Hertford counties.

“This office also covers Northampton County, but it appears that the further west you went, the less rain fell,” he stated. “The bulk of the flooded roads/bridges were in Bertie and Hertford and that’s where the bulk of the repair work will occur.”

Bridgers said he understood the frustration of local motorists, as well as those from outside the area, who could not directly go from point A to point B due to the road closures.

“We had cases of certain roads being fine one minute and flooded the next; when the water began rising, it came up fast,” he said.

While things appear to be getting back to normal, Bridgers did offer words of warning.

“Just because the water has receded in some places, there may still be an underlying danger with pavement structure. Let us get in and assess those situations. Please honor the barricades…we will open reopen these roads when conditions are completely safe,” he concluded.