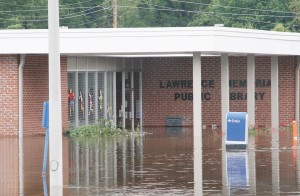 Those words were the ones that many feared when flood waters began taking over parts of Windsor last week; unfortunately those words came true.

Monday morning the staff of Lawrence Memorial Library and its parent organization, Albemarle Regional Library, were at the Dundee Street location trying to salvage anything that was left of the library and its contents.

“This is tough,” said Branch Manager Nancy Hughes. “It made me cry yesterday. It’s just so sad. People depend on the library to be here. The children, the parents, everyone depends on the library.

“We were in the process of planning our fall party and basically now all of that is destroyed,” she added.

Thursday night, flood waters began threatening the library, but several individuals made an effort to save the book collection.

Bertie County Manager Zee Lamb, Buildings and Grounds Supervisor Anthony Rascoe, Hughes and library employee Marie Maryon went into the library and moved all of the books on the bottom two shelves up to higher places.

Betty Massey, the Finance Officer for Albemarle Regional, said the foursome was joined by a group of older adolescents who came in to help.

“They did everything right,” Massey said. “They put the computers on the table and moved the books up, but water started to rush in and they had to get out. There was no way of knowing the water would go that high.”

Water covered the bottom three shelves of books, meaning all of those on the third level were ruined by the water.

“Everything is basically destroyed,” Hughes said. “I knew what I was going to be looking at because I was here for Hurricane Floyd, but who knew I was going to see it again.”

Hughes said the children’s area of the library was completely destroyed.

“It looks like a tornado hit it,” she said.

Hoyle said the group was working diligently to clear the library of anything that was wet to try to have the moisture removed from the building.

“First, we have to get all the books and stuff off the floor and the wet materials out,” he said.

Hoyle said there were approximately 60,000 volumes in the library and that everything touched by the moisture was destroyed and even some of the books that were higher because they absorbed the moisture.

The regional director said he had no information as to when the library would reopen.

“I have no idea at this point,” he said. “We’re still waiting for the insurance adjuster to arrive. We’ve lost all of our computers, furniture and the front desk. All the shelves will have to be removed and the carpeting.”

While they are working to get the library back in shape, the library is not asking for or accepting book donations at this time.

“We certainly appreciate that many people would like to help, but we simply have nowhere to put anything at this point,” she said. “Right now monetary contributions would be more helpful.”

The work before the library staff is difficult, but Hughes said her main concern was the people who loved the library.

“We have people that use the library every day,” she said. “They come in and do online classes or read books. It’s just really said.