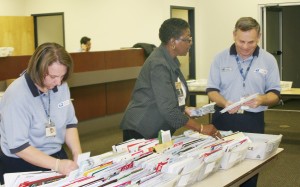 WINDSOR – You’ve heard the familiar refrain about neither rain nor snow stopping the U.S. Postal Service.

Despite being flooded from its home on King Street, the employees of the Windsor Post Office were busy delivering mail Saturday morning and will continue to do their work despite being displaced.

Saturday, postal workers operated from trucks in the Food Lion parking lot behind Advance Auto. From early in the morning until 5 p.m. the postal service delivered mail to those who came to retrieve it.

On Monday, the post office had moved into its temporary headquarters at the former site of the State Employees Credit Union in the Food Lion shopping center.

“We’re still working,” Postmaster Peggy Williams said. “Delivery routes resumed today and anyone wishing to get mail from their P.O. boxes can come here to get it.”

Williams said she anticipated being able to sell stamps and money orders as early as Friday, but couldn’t at this time because there was no computer or phone service at the building.

She said there was no timetable for a return to the post office building on King Street.

“We’re not certain,” she said. “It depends on the weather and how soon we can get things back together.”

Williams said she and her staff would continue to work for the citizens of the town while waiting to get back into the post office building.

“We’re taking it day-by-day and trying to serve the community as best we can,” she said.

WINDSOR – The Bertie County Courthouse is becoming more secure. The historic building has been the subject of much discussion... read more