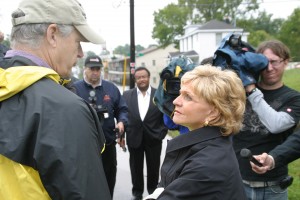 North Carolina Governor Beverly Perdue listens as Windsor Mayor Jimmy Hoggard addresses the needs of his town, one left ravaged by floodwaters this week. The Governor stopped in Windsor early Sunday afternoon on a tour of several flooded areas in eastern North Carolina.

Windsor Mayor Jimmy Hoggard had a list for her – literally and figuratively.

“Is this the same area that was flooded after Floyd,” Governor Perdue asked, referring to the 1999 hurricane that also left much of Windsor’s downtown area under water.

Mayor Hoggard said it was and added that many people had been affected by the tragedy.

“On the other side of the river, we went house to house on a boat yesterday and it’s devastated,” he said. “There are 150 homes that are either totaled or will at least have to be gutted.”

Governor Perdue asked when the health department would go through and assess damage and the mayor said the work would begin on Monday.

“These are the same people who were hurt before,” the governor asked and got an affirmative response.

“What can we do to help,” she questioned.

“I’ve got a list,” the Mayor told her and pulled out sheet of paper documenting the help the town will need as it prepares to rebuild.

The first item on the list was state personnel and dump trucks to help remove debris from the town.

“I’ve already done mine,” Governor Perdue said. “Eye-balling it (the damage), I would say you will meet the federal threshold.”

Hoggard said the Federal Emergency Management Agency would assist with 75 percent of the town’s cleanup costs and asked if the state would pick up the tab for the other 25 percent.

“We’ll do what we need to do to keep you whole,” she said.

Mayor Hoggard also told the governor how much he appreciated the work of the volunteers and the state’s emergency management team.

“I can’t say enough about the volunteers and the yeoman’s job they did,” he said. “We wouldn’t be here without them.

“We also appreciate the work of the state emergency management people,” Mayor Hoggard added. “They have done a great job.”

Governor Perdue said she knew the hard work would begin on Monday, but called the list of items which were requested by the town “easy stuff to do.”

During a question and answer session with the press, the governor said she was saddened by what she saw.

“It looks sad and tragic,” she said. “People were really starting to get back to living their lives again and to have it happen to them again is so sad.

“If you look today, you can already see stuff lying in ditches where people have begun to clean up,” the governor continued. “That’s the hard part – when people lose everything.”

Governor Perdue said it was important for other North Carolinians to come to the aid of those in Windsor.

“That’s what we do in North Carolina,” she said.

Asked if people should consider leaving the flooded area, the governor said she wouldn’t begin to tell people what to do.

Following the press conference, the governor took time to talk to retired Windsor Mayor Bob Spivey, whose home was flooded for the second time in just over a decade.

Spivey’s house had 40-plus inches of water during the aftermath of Hurricane Floyd and had 17 inches in his home this time.

After the Governor expressed her sorrow, the retired mayor said he would continue to move forward.

“We have to deal with what we’ve got,” he said.

Governor Perdue asked if he had any damage in his area and Cherry said no.

“We may all live in different areas, but we are one county,” he told the governor. “When they hurt, we hurt.”