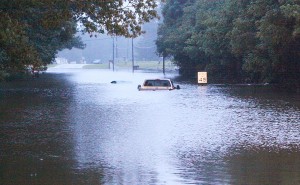 As Windsor residents woke up they found much of the town under water, including many of the same areas that were flooded in the days following Hurricane Floyd in 1999.

A quick tour of Windsor showed flooding through much of the downtown area, including King, Queen, York and Granville streets.

Across the street, the U.S. Post Office was also largely underwater.

Livermon’s Zoo and Park was completed covered with floodwater, but town officials had removed the animals to higher ground on Thursday.

Other Windsor landmarks that flooded include Southern Bank, the Windsor Rescue Squad Building and approximately one-half of the downtown businesses.

The flooding was a result of five consecutive days of rain, causing the Cashie River to overflow its banks.

Many residents repeated the refrain, “it’s been a short 500 years,” referring to the a statement made following Hurricane Floyd.

While the townspeople spent the day surveying damage and comparing the water levels to those of a decade ago, they also pledged to move forward.

Windsor-Bertie County Chamber of Commerce Director Collins Cooper said the Chamber building (York Street) was flooded, but also stressed that the organization would not stop its work in Windsor.

“We’ve been here before, and we’ll do what we did then, rebuild and move forward, Cooper said.

Windsor Mayor Jimmy Hoggard spent much of the day surveying the town and working to make sure residents were safe.

“I’d say the park is under five feet of water right now,” Mayor Hoggard said Friday afternoon. “The Rescue Squad building probably has four feet of water in it and Bunn’s Barbecue is underwater to the top of its front door.”

Hoggard said it had been a tough day, but the people of Windsor have responded well. All totaled, he said at least 75 residents had been evacuated due in large part to the work of the Windsor Fire Department.

“The firemen have done great work going in and getting people out,” Hoggard said. “They have done a superb job under tough conditions.”

While things have gone as well as town officials could hope for, the Mayor said the information the town received did cause some problems.

“The river rose more rapidly and higher than they said it would,” he said. “I think it’s about stopped rising at this point and the worse is perhaps behind us, but I can’t say that for sure.”

Bertie County Sheriff John Holley and his deputies were also busy helping with evacuations. He estimated at least 60 people had been taken to safety from the north side of the Cashie River bridge (US 17 Business).

He said the main concern he had was that motorists were not obeying road closed signs.

“I really want to encourage everyone to be careful and not try to make it through roads that are closed,” Sheriff Holley said. “They are closed because they are not safe.

“I also want to encourage people to stay off the roads as much as possible,” he added. “They are much safer staying where they are.”

The Sheriff, who has been on duty himself in excess of 30 hours by the time Friday rolled around, said eight deputies were working to aid residents throughout the county.

The most well-received news coming out of Windsor and Bertie County is that no major injuries or fatalities have been reported.

By Friday night, floodwaters were stationary in most of Windsor and had not risen in several hours.

According to Mayor Hoggard, power will not be shut off unless something unforeseen occurs. The town’s electrical substation is secure at this point.

Hoggard said only if floodwaters from the Cashie River swamp the substation would mandate its closing.

Several individuals were rescued from the flood waters left behind by a record-setting rainfall event, a combination of a stalled... read more