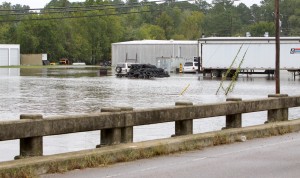 Flooding is shown early Friday morning from the NC 42 bridge over the Ahoskie Creek. Photo by Bruce Ramsey of Tar Heel Studio

AHOSKIE – Inundated by reports of two feet of rainfall, town officials here are keeping a close eye on the Ahoskie Creek which flooded in the aftermath of a week-long weather event.

Town Manager Tony Hammond said the creek was expected to crest on Saturday.

In comparison, the measurement was 2.93 feet early Wednesday morning.

Ahoskie Creek crested at 17 feet in the aftermath of Hurricane Floyd in 1999.

“We’ve had a ton of rain; a lot of it fell very hard and fast,” Hammond said at lunchtime on Friday.

Hammond said the rain gauge at the town’s Wastewater Treatment Plant off Johnny Mitchell Road had been emptied three times since Sunday. The gauge holds eight inches of rain.

“That’s at least 24 inches of rain since Sunday; you can’t expect that much rain to quickly go away,” Hammond said.

With the exception of the McGlohon Street-Roberts Street area and the overwash at Evans Street and NC 42, all of Ahoskie’s streets are not experiencing any flooding issues. That wasn’t the case on Thursday where 32 streets were flooded.

Currently, the major problem area is adjacent to the Ahoskie Creek. The Ahoskie Creek Recreational Complex is underwater. It was that area of town that severely flooded during Hurricane Floyd. The homes there were purchased by FEMA and eventually turned over to the town.

Recently, the town invested $1.1 million of its own money plus grant funding to construct the Ahoskie Creek Recreational Complex. The newly constructed ballfields there were experiencing minor flooding on Friday afternoon.

“The outfall drainage ditch there did its job on Thursday, but when the creek began to rise there was nowhere for all that water to go,” Hammond noted.

There is also one residence on West Memorial Drive threatened by the flood waters from Ahoskie Creek.

Meanwhile, several major roads leading in and out of Ahoskie are underwater.

Overwash from the Ahoskie Creek has forced the closure of NC 42 at Evans Street and US 13 South is closed just north of Stoney Creek. NC 561 East (Harrellsville Highway) is closed at Godwintown Road due to flooding at the Bear Swamp Bridge.