Tunis is no stranger to floods 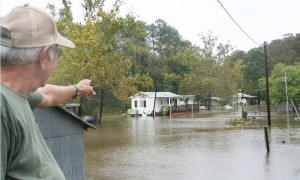 Fred Gilbert, owner of Tunis Landing Bait & Tackle, points out one area of flooding in this small community nestled on the banks of the Chowan River near Winton. Staff Photo by Amanda VanDerBroek

TUNIS — As of Thursday afternoon, Tunis Landing Bait and Tackle Shop was still open despite flood waters from the Chowan River knocking on its doors.

Inside, the shop’s owners Fred and Melissa Gilbert waited on customers. Though it seemed like a typical day, the Gilberts and other residents were keeping their eyes on the rising water outside.

“We’ve had business, but not bait business,” said Mr. Gilbert. “Everyone likes to ride to Tunis when the water gets high.”

The remnants of Tropical Storm Nicole are leaving their mark on Tunis just like other weather disturbances have in the past. Many in this village have learned from past floods, raising their homes above the flood level.

On Thursday, a few Tunis residents voluntarily evacuated with over half of the river community sitting in water. The village’s church had water lapping at its steps and just yards away water sat nearly level with one home’s front door.

“We seem to be the first sign for high water,” said Mr. Gilbert about flood prone Tunis.

The Gilberts have owned a home in the village since 1976 and purchased the bait and tackle shop three years ago.

Gilbert said had the water had slowed down a bit, but had risen at least two feet since early morning.

On the other side of the community, Steve Hoggard’s Retirement Village was fairing a little better though encroaching flood waters were threatening the homes lower and closer to the riverbank, including Amanda Grimes’ residence. The only causality so far on Grimes’ property was a picnic table that had to be moved away from the Chowan which had swollen beyond its banks into the yard.

“We call that the beach,” she said referring to the other end of the community. “Down there they’re pretty bad off.”