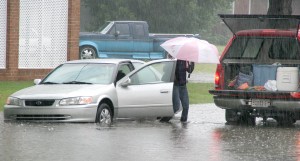 A motorist whose vehicle stalled along a stretch of Myers Street in Ahoskie slowly makes their way to the tailgate of Ahoskie Fire Chief Ken Dilday’s pick-up truck around 11 a.m. Wednesday morning. Staff Photo by Cal Bryant

Hopefully, what’s left of a tropical system that will arrive today (Thursday) in the Roanoke-Chowan area will bear no resemblance to Hurricane Floyd of 1999.

However, an already saturated ground from soaking rains Sunday through Wednesday will not be very receptive to another round of the wet stuff thanks to the remnants of Tropical Storm Nicole.

From Sunday through Wednesday, rainfall, some extremely heavy at times, was driven by a stalled frontal boundary and a slow-moving upper trough. Now comes what’s left of Nicole, a storm that actually dissipated late Wednesday afternoon, although it was still super-soaked with moisture.

As of 5 p.m. on Wednesday, National Weather Service officials were still expecting the frontal boundary and Nicole’s remnants to merge into a new low pressure system and track up the East Coast.

“The worst will hopefully be over by Thursday morning, but even that forecast changed as the day progressed on Wednesday,” Hertford County Emergency Management Director Chris Smith said.

Smith advised all residents of northeastern North Carolina to monitor the storm by listening to the radio or watching the local TV newscasts.

As of late Wednesday, Smith said the local area could expect between 4-to-8 inches of rainfall in addition to what has already fallen. He said some isolated areas could see 10 inches of rain.

“This is a flooding event; not a wind event,” Smith stressed. “At worst we could see 15-to-25 mph winds out of this system.”

The National Weather Service placed all of Hertford and Bertie counties and portions of Gates and Northampton under a Flash Flood Warning as of 3:50 p.m. on Wednesday. Those living in areas that are prone to flash flooding should closely monitor the situation and be prepared to take action if so warranted.

Local roads were also flooded in spots and should remain that way until the heavy rain tapers off.

“Stay off the roads if you don’t have to be on them,” Smith advised. “The overwash is hit or miss…you can speed up in some spots and then you hit an overwash.”

Once such motorist found themselves stalled out on East Myers Street in Ahoskie late Wednesday morning. There, Ahoskie Fire Chief Ken Dilday carefully maneuvered his town-owned vehicle next to a small car that was stalled in an area directly behind Lowes Foods.

The driver of the vehicle gingerly exited the car and sat on the tailgate of Dilday’s truck as he steered it to higher ground.

Motorists are urged not to travel across flooded roads. Just one foot of water can float many vehicles, while two feet of rushing water can carry away SUVs and pick-ups; and flooding could hide the fact that a road has been washed away, creating even more hazardous conditions.

Those noticing dangerous areas on local roadways are asked to report them immediately to the nearest law enforcement agency or the Department of Transportation.

After an extremely dry summer, it appears the Roanoke-Chowan area and all of eastern ‘Carolina will experience a drought-buster today... read more