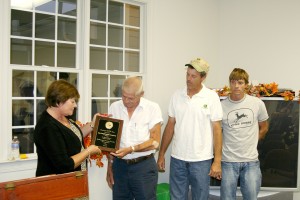 Northampton County Chamber of Commerce President June Warren presents the organization’s Business of the Year to C.B. Perry of Gay Implement Company of Seaboard. He is joined by Mace Perry (right) and Malcolm Perry. The honor came during the Sept. 23 annual meeting of the Northampton Chamber. Staff photo by Amanda VanDerBroek

The event drew attention to the work of CADA as well as honored several area businesses, organizations and governmental entities for their work in the county.

The Chamber awarded Gay Implement based in Seaboard as Business of the Year.

“Gay Implement and I go back a long, long way when my husband farmed,” said Chamber President June Warren. “They’ve done a lot for the community and the Chamber. They have never turned us down for anything.”

“We could not do these events without the support of the county,” she said. “I’m just so proud to live in a county where there is so much support.”

Credit was also given to the town of Lasker, a small community that has boasted such happenings such as a Centennial event, a Daughtrey concert and even has a Grand Ole Opry.

CADA Executive Director Sallie Surface served as the guest speaker and spoke about the non-profit organization that has served Northampton, Bertie, Hertford and Halifax counties since 1962. Surface said there are 49 CADA employees calling Northampton County as home.

CADA is a community action agency that assists the community with various issues.

“CADA was actually formed when some of the leaders in Hertford, Bertie, Northampton and Halifax came together and decided they needed a regional organization to look at ways to improve the quality of life for people in the four counties,” she said. “They set up committees in the four counties to look at education, health, agriculture and recreation.”

CADA has been involved in various programs and projects throughout the four counties, including renovating existing high schools which provides apartments for senior citizens. Such projects have been done in Woodland, Ahoskie and Enfield.

Surface noted the importance of the work CADA has done with housing. Using a new home with an average mortgage amount of $144,200, Surface calculated the local business impact as $17,549, local construction income as $96,890 and local government taxes and revenue annually at $5,675. Total additional income to local government, employees and businesses over 10.5 years was calculated at $79,563.

Surface noted CADA received over $6 million in American Recovery and Reinvestment Act (ARRA) funding which allowed them to support many successful programs, including  he Workforce Investment Act (WIA) program which helps both adults and youth obtain the work skills they need for getting jobs.

ARRA funds were used to help support the weatherization of homes, already a successful program, which helps to address energy conservation by preventing weather infiltration. The program prioritizes homes with senior citizens and children.

With the ARRA funds, Surface said CADA also set up the Success program, which allowed the organization to partner with area businesses and helped local residents improve their education and have a job.  The program helped place 78 people with work experience, 54 of whom received unsubsidized jobs. Surface noted that program will end September 30.

Also recognized at the meeting were new businesses, Pics Grafix in Jackson and the yet-to-be opened Corner Tavern and Grill in Conway.