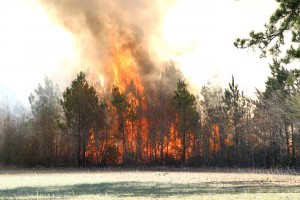 The fire, which started accidently, did not threaten any structures despite burning the 40-45 acres of wooded area, according to Bertie County Forest Ranger Mike Hoggard.

“A man was doing some bush hogging and hit some rocks and a cinder block (causing a spark) which set a fire in the grass and went into the woods,” Hoggard reported.

The call came in at approximately 5 p.m. Saturday and firefighters battled the blaze until approximately 10 p.m. after it rekindled.

“We had a fire department present for structural protection, but nothing was damaged,” Hoggard said.

He added that the blaze occurred because of the dry conditions facing the areas Saturday and said the rain that has come in the two days since would help considerably.

“The rain will reduce the danger significantly,” he said. “It won’t put us all the way out of danger, but sure is going to help.”

Hoggard said the North Carolina Forest Service in Hertford County provided the tractor to help contain the fire because Bertie County’s fire plow was already in use fighting a blaze on the Bertie-Northampton county border between Roxobel and Rich Square.

WINDSOR – The Bertie County Courthouse is becoming more secure. The historic building has been the subject of much discussion... read more