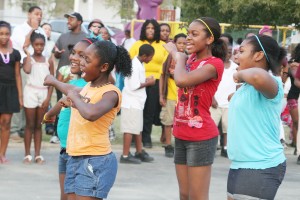 A portion of Thursday’s STEP program kick-off in Windsor included a talent show, one featuring 10 acts, including this foursome of young ladies who performed a dance routine. Staff Photo by Thadd White

WINDSOR – It was an event that pleased everyone involved.

Thursday afternoon, the town of Windsor sponsored a Community Celebration as they rejoiced in their acceptance to the NC Rural Center’s North Carolina STEP (Small Towns Economic Prosperity) program.

“It went so well,” Windsor Mayor Jimmy Hoggard said. “We were pleased, the folks from the Rural Center were pleased and I think the community had an excellent time.”

During the celebration, the town served 600 hot dogs, 250 bags of popcorn and more than 250 servings of cotton candy.

In the process, more than 500 people enjoyed the afternoon of celebration that included the public announcement about the program and the first round of a talent show competition.

“The Rural Center wanted us to have a kickoff that would bring everyone in the community out,” said Windsor Commissioner Collins Cooper. “We were glad to see so many people come out.”

Windsor was one of 11 towns chosen for the STEP program in 2010. They were joined by Burnsville, Canton, Hertford, Maysville, Ramseur, Red Springs, Robbinsville, Siler City, Star and Warsaw.

The STEP program has three goals. They include:

The program has been in existence for four years and the new members are the third group accepted to the program.

It began with 33 towns as part of a three-year demonstration, some participating as individual sites and others as clusters of cooperating communities.

The STEP program provides coaching assistance through a paid coach who works with local leadership teams to identify critical needs and community assets as well as developing economic strategies and prioritizing projects. They also help with seeking out financial resources.

The program also aids towns with grant assistance and the opportunities for training and shared learning.

As part of the process, many of those who attended Thursday’s celebration were able to participate in a survey that will give town leaders information about the desires of its citizens.

“We wanted to give everyone a chance to come out and give their input,” Cooper said.

After compilation of the survey data, the town will move forward with plans for the STEP program.