MERRY HILL – What a difference a year makes.

2010 saw Lawrence Academy play a limited boys varsity soccer schedule, but one of their matches included a 10-0 loss at Rocky Mount Academy. 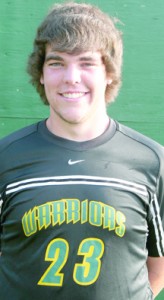 Monday in Merry Hill, the Warriors fell once again to the Eagles, but this time Lawrence showed a lot more maturity despite falling, 3-1. The loss also broke a two-game win streak for Lawrence.

They were also in the midst of two matches in two days and bounced back from the Rocky Mount loss to down Arendell Parrott on Tuesday, 2-0, to raise their record on the season to 4-3.

In Monday’s match, Westray Hicks had two goals and an assist for RMA with Bradley Jackson scoring the other.  Junior striker Cliff Matthews scored the lone goal for Lawrence, while, goal-keeper James Matthews had eight saves.

“He (James Matthews) was the last resort of defense,” said Warriors coach Luis Giron.  “He’s fast and he can read any sort of situation in a game so we’re lucky to have him this season and that’s why he has a lot of saves.”

Rocky Mount, out of the NCISAA 2A Eastern Plains Conference, controlled the game for most of the match with Lawrence getting off just four shots.

“We gave up opportunities in the top third of the field,” said Eagles coach James Westcott, “and I think our guys kind of took them lightly.”

Despite being outshot, 8-0, in the first 23 minutes of the match, the Warriors defense kept the game scoreless. James Matthews turned away five shots in the first 10 minutes of play including a double-stop in the box on a throw-in.

Lawrence got on the scoreboard first with 17 minutes remaining in the half when senior midfielder Mason Hughes swiped a RMA pass and fired ahead to Cliff Matthews.

Despite stumbling on his dribble, Cliff Matthews was able to catch Eagles goalie Selden Bullock stretching the other way and tickled the twine from the right side in the box with a solid shot into the back of the net.

Rocky Mount came back, however, and got the equalizer 11 minutes later at the 28-minute mark off a corner kick as Jackson fired in a blast just inside the left post to make it 1-1.

The Eagles had one other attempt with time winding down, but their shot was just wide of the right post and the game entered halftime tied.

Rocky Mount scored their goal to take the lead eight minutes into the second half as Matthew Cash found Hicks for the first of his two goals in the half.  Two minutes later, Trip Andracchio assisted on a pass to Cash to make it a 3-1 lead.

The Eagles had 11 more attempts the rest of the way, but the Warrior defense rose and asserted itself to keep the match close. However, Lawrence was never able to capitalize on their lone attempt by Hughes and the match ended with a two-goal advantage for the visitors.

“We had to fight every single ball for 80 minutes,” said Giron.  “I told them at the beginning of the match not to worry about tomorrow’s (Tuesday’s) game because we had to get through this one first.

“Sometimes we have to work on challenging,” he added, “taking care of your zone at that particular moment.”

“I guess being off for three days we thought we could come in here and pick up the same score we had last year,” said Westcott, “but their keeper was really strong.”

Lawrence is off until October 5 when they travel to Terra Ceia Christian School.  The Warriors close the season at home October 12 against Pungo Christian Academy

Ridgecroft School tennis has improved to 7-2 on the season after winning two of their last three outings. The Lady... read more