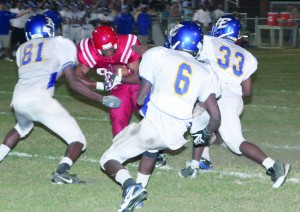 With less than 30 ticks left on the second quarter clock, Gates County HIgh School junior D.J. Costen bursts into the endzone to give the Red Barons the lead 23-15. Costen’s score would prove to be the difference as Gates County knocked off Edenton by that final count.

The victory didn’t come easy, however, as the Red Barons had to overcome a late Edenton charge, a penalty flag that came from nowhere and pair of their own missed opportunities.

The Red Barons showed the toughness of a quality football team, however, and shut out Edenton in the second half while holding the Aces to just 63 yards of offense in the final half.

The Aces did get on the board first, however, as they took their first offensive possession 40 yards to paydirt on just three plays. The first two plays from scrimmage, saw the Red Baron defense force Edenton back four years thanks to a huge tackle by E.J. Horton.

On third down and 14, however, Edenton quarterback Tyler Rinehold found Mac Leary streaking down the sideline and the senior wide receiver raced 64 yards for a touchdown. Tyquan Flemming added the conversion and Edenton led with just under 10 minutes to play in the quarter.

The Red Barons, however, came right back. Gates County marched 60 yards on five plays to get into the endzone. Junior running back DaShawn Stokley did the bulk of the damage early, picking up nine yards on the first two plays.

Senior quarterback Graham Hobbs, however, finished the drive when he connected with Zach Badgett on a 49-yard scoring strike. Angelo Rosati added the PAT and the Red Barons had closed within 8-7.

Edenton took their next possession and drove from their own 35-yardline down to the Gates County 18, but the Red Baron defense stiffened and forced the visitors to turn the ball over on downs.

Featuring a steady diet of Stokley’s running, the Red Barons moved right down the field. Stokley picked up three to four yards a pop and kept the chains moving. With Biggy mixing in a few carries by Tyrek Ruffin, GC reached the Edenton six-yardline.

With everyone expecting another run, Hobbs used play-action to set up a six-yard pass to Jeremy Smith and the senior gave the Red Barons their first lead of the night.

On the extra point the Aces jumped offsides and moved the ball to the one and a half.  Biggy decided to take the two-point route and called on Stokley who punched it in for a 15-8 lead by the Red Barons.

The Aces got good field position on the next possession as Jamez Moore returned the kickoff all the way to the Red Barons 15-yardline.

It took Edenton just three plays to find the endzone, the scoring play coming on a six-yard run by Moore. Josh Laverty added the PAT and the game was deadlocked at 15-all.

After an exchange of possessions, the Aces appeared to be moving the ball well, getting to their own 46-yardline on the first four plays. Facing fourth down and one, Edenton elected to go for it, but Smith was there to bring down Moore for a four-yard loss and give his team the ball back.

Working with the short field, the Red Barons marched down to the 26-yardline of the Aces in four plays. From there, Hobbs connected with Badgett for a 14-yard pickup and then found D.J. Costen on a 12-yard scoring pass.

The Aces again jumped offsides on the extra point attempt and Biggy again chose to go for two. This time, Emmanuel Knight punched it in and Gates County led 23-15 with just 27.7 seconds left in the first half.

Neither team got much going during the opening part of the third quarter.

The Aces, however, opted for a fake punt at their own 32-yardline despite facing a fourth-and-eight. The punter’s pass fell incomplete and Gates County took over at that point.

The Red Barons marched down to the 21-yardline, but the drive stalled and Rosati missed a 38-yard field goal attempt wide left.

The two teams exchanged possessions the rest of the quarter and well into the fourth quarter with neither mounting a serious threat.

Gates County punted the ball away with 3:16 remaining in the contest with Edenton having one more attempt to tie the game.

The Aces drove to the 35-yardline of the Red Barons on four plays, but faced a fourth down situation. The Gates County defense rose to the challenge and stopped Flemming for only a one-yard gain, but as the celebration erupted a flag flew in from the umpire and the Red Barons were called for a horse collar that didn’t appear to have happened.

On the next play, however, Edenton coughed up the ball and Terrence Riddick scooped it up for Gates County with 2:06 to play.

From there, the Red Barons were able to run out the clock and preserve the win.

Gates County (4-1) will be at home again next week when they open Tar-Roanoke Conference play by hosting the Chargers of Weldon High School.