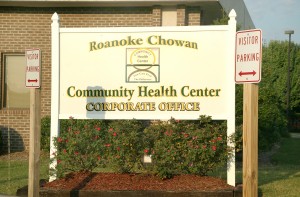 Roanoke-Chowan Community Health Center has plans to construct a new office, one that will bring all of its Ahoskie-based medical services under one roof. Staff Photo by Cal Bryant

With the Ahoskie Town Council giving a favorable vote to rezone a small parcel of land from R-6 (Residential) to O&I (Office and Institution), Roanoke-Chowan Community Health Center (RCCHC) will move forward with its plans to build a new medical office on Hertford County High School Road.

In conjunction with the proposed RCCHC facility, the East Carolina University Medical and Dental School will open a service learning center in Ahoskie. That stand-alone center, which will join RCCHC’s new facility, will be staffed full-time by ECU Dental School students (completing their residency obligations) and school faculty.

ECU has broken ground and launched construction on their new Dental School in Greenville and announced that 10 service learning centers will be built across the state. Ahoskie was among the first three sites chosen for such a facility.

“Our clinical offices here in Ahoskie as well as our corporate office will be under one roof, allowing us to expand our capacity to provide the best of all medical services,” said Kim Schwartz, CEO of RCCHC. “The offices we currently operate in here in Ahoskie do not afford us the opportunity to grow.”

With the new buildings (the ECU service learning center and RCCHC’s plans for a larger facility), Schwartz said primary medical care, pediatrics, behavioral health and oral health will be offered.

“We are extremely excited about this,” Schwartz said. “For us it meets the needs of our community.”

Schwartz explained that the ECU service center will occupy one building with RCCHC in another. They will be joined by a walkway.

“There will be two separate facilities; ECU will own one and we will own the other, but we will all work together,” Schwartz noted. “We have scheduled meetings next week with the architects of the two facilities. ECU plans to break ground here in Ahoskie in January; we hope to follow that a few months later.”

Meanwhile, Schwartz is waiting for the final results of an application RCCHC submitted for federal funds to build its new facility. While she said the preliminary results seem to favor the RCCHC application, she will not know for sure until Nov. 1.

“We have other options if the federal funds do not come our way,” she said.

The two facilities will be built on land recently deeded to RCCHC and ECU by Roanoke-Chowan Alliance. That entire property is 27.6 acres and includes the current RCCHC building, Northside Behavioral Health and ViQuest. The buildings will be constructed in the southwest corner of a now empty parcel of land behind those facilities.

The rezoning had to occur due to one parcel of land transferred by R-C Alliance to RCCHC and ECU was R-6 property.

“Keeping that R-6 would prevent the construction of those types of medical and dental facilities,” Ahoskie Town Manager Tony Hammond told the Town Council members at their regular scheduled meeting on Tuesday. “Rezoning that one portion to O&I will allow for the development as proposed and will be consistent with the zoning of the majority of the remainder of that property (already zoned O&I).”

The Ahoskie Planning Board had unanimously approved the request at their Aug. 18 meeting and forwarded the issue to the Town Council.