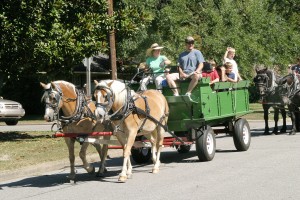 AHOSKIE – It was the “break-out” year Ahoskie officials desired.

Indeed, this year’s Heritage Day did attract thousands….in excess of 5,000 for those keeping score at home.

“We were extremely pleased with the turnout and the participation by the vendors, the bands, the contest competitors and, of course, the Heritage Day parade,” Blackburn added. “It was a great two days to be in Ahoskie.”

The 2010 version of Ahoskie Heritage Day marked the event’s seventh year. Previous attendance was sporadic with a less than desirable turnout of vendors.

This year was different as the “circle” in front of the Ahoskie Amphitheater was filled with food and craft vendors, all sorts of game, rides for the young and the young at heart and plenty of people to enjoy all those festivities.

The horses were not limited in duty to moving logs. They also pulled people in uncovered wagons, making their way at a leisurely pace along the banks of the Ahoskie Creek. Meanwhile, huge farm tractors were used to pull trailers full of individuals enjoying a hay ride around the festival grounds.

People were also moving in another way, with their feet, as the festival featured plenty of foot-stomping music provided by Pizazz, the Band of Oz, Double Eagle Band and DJ Jay Jenkins.

“This, by far, was our biggest Heritage Day ever,” said Ahoskie Town Councilwoman Elaine Myers. “I heard so many positive comments.”

Myers also noted that people came from far and wide.

“I spoke with a family from Maryland who said they thoroughly enjoyed Heritage Day,” Myers noted. “They felt comfortable having their children to roam the grounds carefree.”

“It doesn’t matter what needed to be done at Heritage Day, our public works employees, recreation department staff and the wastewater treatment plant team got it done,” Hammond said. “We are blessed to have a great staff. Ya’ll make my job much easier.”

Under the direction of Trey and Harriett Byrum, 10 local teams participated in the Backyard BBQ contest, grilling pigs to perfection; the meat used later to serve barbecue plates from where the proceeds benefitted the Ahoskie Public Library. Judges were certified by the NC Pork Council.

Over in the horseshoe pits, Ernie Keel and Logan Kinlaw staged yet another thrilling event. When the dust had settled, Aro Parker Jr. teamed with Frank Harris Jr. to capture the first place trophy. Second place went to the team of Elvis Blunt and Willie Westbrook while Kevin Robinson and James Mason claimed third place.

“We’ve tried some different things over the years to get Heritage Day off the ground,” Blackburn concluded. “Based on the success of this year’s event I think we’ve found a winning combination. We’ve got a great working relationship with the Ahoskie Chamber of Commerce and that makes a huge difference. Look for bigger and better things to come for the 2011 Ahoskie Heritage Day.”

Nearly $1.8 million in federal and state grants plus a low-interest $300,000 loan will fund a sanitary sewer district for... read more