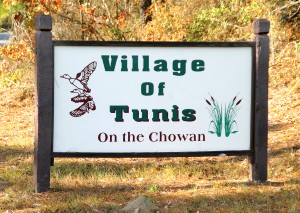 Nearly $1.8 million in federal and state grants plus a low-interest $300,000 loan will fund a sanitary sewer district for the residents of Tunis. File Photo by Cal Bryant

WINTON – It wasn’t the full amount they sought, but a $1.225 million grant from the Rural Development arm of the United States Department of Agriculture (USDA-RD) will allow Hertford County to move forward in the development of the Tunis Sewer District (TSD).

In a special called meeting here Tuesday afternoon, the Hertford County Board of Commissioner voted to accept the USDA-RD’s letter of conditions, thus allowing the county to receive the grant.

That grant, along with a $300,000 loan from USDA-RD and a $500,000 grant from the NC Rural Center, will pay for all but a small portion ($6,300) of a $2,068,300 project that will construct a sanitary sewer system for the residents living in Tunis, a small Hertford County community on the shores of the Chowan River southeast of Winton.

The $6,300 will be covered by connection/tap fees to the system.

Earlier in the process, the commissioners approved a Memorandum of Understanding between Hertford County and the Town of Winton for a centralized sanitary sewer system that will serve the Tunis community.

Over the years, Tunis residents have experienced problems with private septic systems; some did not have one at all, rather “straight piping” raw sewage into inappropriate containers and hauling it offsite. Those environmental concerns were discovered in the spring of 2008, prompting the State of North Carolina to issue notices of violation against some Tunis residents using the “straight piping” method.

Additionally, environmental health personnel also learned in 2008 there were existing septic systems too close to the water, meaning they do not meet setback requirements for sewer systems.

While Hertford County officials devised a plan to alleviate these environmental concerns, Tunis residents were granted “pump-and-haul” permits by the state. That means they are placing certain types of holding containers into the ground, and then certified pumping technicians go in and remove the waste.

That solution was deemed as temporary until the county could come up with enough funds to install a sewer system for the entire community.

In November of last year, the county submitted a grant request for $1.557 million from USDA-RD.

“Because this is stimulus funding administered through USDA, we are eligible to qualify for 75 percent of the grant request,” Hertford County Manager Loria Williams noted. “Had this been a typical grant request of USDA Rural Development, the normal process calls for a 20-25 percent grant and the rest taken out as a loan. We could not afford the latter; we needed highest percentage of the grant in order to make this affordable for the residents of Tunis.”

While Tuesday’s action was just a formality of signing the USDA-RD paperwork in order to receive the grant, the key in moving forward with the project lies with the registered voters residing in Tunis. They will be asked to vote for or against general obligation bonds that will float the $300,000 loan, one that will be paid back over 40 years. Williams said that will require a special referendum, one that may be scheduled as early as February of next year.

While the grant/loan will pay the upfront construction costs, the TSD will require long-term operational and maintenance costs. Those costs (user fees) will be paid for by Tunis residents.

WINTON –  A Virginia woman accused of attempting to run over a Murfreesboro Police officer with her vehicle now sees... read more