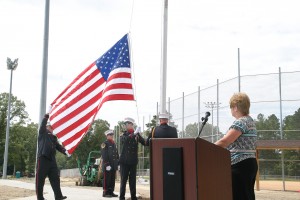 Woodmen of the World representative Eleanor Hollowell watches as members of the Hertford County Firefighters Association – from left, Barry Blowe, Will Blanchard, Jamie King and Chuck Munford – raise a flag donated by the local Woodmen Lodge to the Town of Ahoskie for placement at the new Ahoskie Creek Recreational Complex. Photo by Cal Bryant

AHOSKIE – Early to mid September is reminiscent of two tragic events, one local and one national.

During an “In Honor and Remembrance” ceremony conducted at high noon at the new ball fields currently under construction at the Ahoskie Creek Recreational Complex, local officials paid tribute to the deadly attacks on American soil on Sept. 11, 2001 as well as recalling the floodwaters of Hurricane Floyd on Sept. 16, 1999. That flood wiped out homes and businesses throughout the local area, including an entire neighborhood in Ahoskie where the ball fields stand today.

Hosted by Woodmen of the World Lodge # 328 of Ahoskie, Saturday’s event was highlighted by the dedication of a flagpole and United States flag donated to the town by the local WOW Lodge. NC District 4 Senator Ed Jones was the guest speaker.

“This park brings tears to my eyes every time I’m here; I love the beauty of what’s coming back to this, what I call the Holy Land, for all the destruction here years ago (from Hurricane Floyd),” Ahoskie Mayor Linda Blackburn remarked. “I want to thank Woodmen of the World for your untiring dedication to make sure we have beautiful flags in our town. I’ve always been impressed with the work of Woodmen of the World.”

Rev. Robert May, a member of the local Woodmen Lodge, made brief remarks before offering the invocation.

“This is a joyous occasion; nine years ago it was not that way,” he said. “Since that time our men and women in our armed services have given of themselves unreservedly to protect this great nation.”

In his remarks, Senator Jones spoke on how Americans have rallied together under our nation’s flag.

“As I look around at these baseball fields and softball fields, that goes back to baseball and apple pie, that’s about as American as you can get, but it’s the flag that unites us all,” Jones said. “We have so many freedoms here, but they all come under the banner of our flag…its 50 stars and 13 stripes.”

In his personal listed of priorities, Jones said he puts God first, then, in descending order, his country, his family and his job.

“Some may ask why I put my country ahead of my family,” Jones noted. “When we go into battle, we uphold our flag so we can live these freedoms we have. We will die for citizens we don’t know. We need to have our soldiers in our hearts; they are our children paying a price so we can stand here in freedom today. Without the blood they shared on our behalf, we would not be here today.

“We raise this flag today in honor and remembrance,” Jones continued. “It will be here always. When our children and our children’s children are playing on these fields, we can reflect back to this time and day on 9-11, honoring those who died.”

Senator Jones concluded by saying, “I salute those who had the vision for this great complex for all to enjoy. Thank you to the Woodmen of the World for not letting us forget where we came from. When we see these red, white and blue flags, it reminds us all of whom we are, one nation, under God, indivisible with liberty and justice for all.”

Eleanor Holloman, a representative with Woodmen of the World Life Insurance, presided over the flag/flagpole dedication.

“A lot has gone on in this town over the years to develop this athletic complex and Woodmen of the World is proud to be a small part of this effort,” she said.

According to Hollowell, Woodmen of the World lodges throughout the nation, since 2002, have presented flags and flagpoles to not only the victims and heroes of 9-11, but also in honor of the nation’s military, firemen, EMS personnel and policemen.

“Our emergency responders deserve our thanks and admiration,” she said. “Fraternalism and patriotism for those who are familiar with the Woodmen organization is what we’re all about. Since 1947 we have presented over two million flags nationwide.”

“Nine years ago we experienced horrors we thought we’d never see in this country,” Hollowell noted. “We had people attacking us and we lost lives in New York, Washington and Pennsylvania. Hundreds of heroes came forth at that time and we, as a nation, became more close knit. The events of that one day changed our lives forever. It also made us realize just how precious our freedom really is and that we never should take it for granted.”

An Honor Guard from the Hertford County Firefighters Association accepted the flag from Hollowell and in a precision drill, unfolded the red, white and blue cloth and ceremoniously raised it and then lowered it to half-staff in remembrance of Sept. 11, 2001.

Hertford County Magistrate and former Ahoskie Town Councilman Doug Brinkley capped off the ceremony with the playing of “Taps.”

Members of the Murfreesboro Fire Department and Hertford County Emergency Services join to raise a flag on Saturday at the... read more