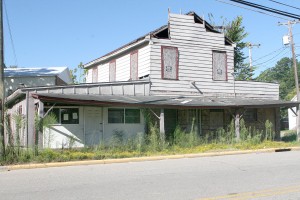 Town of Windsor officials are working with the owners of this property, located at the corner of Sterlingworth and Ghent streets, to have the structure demolished. Staff Photo by Thadd White

WINDSOR – The Windsor Board of Commissioners are continuing their effort to clean up the town’s eyesores.

At Thursday morning’s meeting, the board agreed by consensus to work with owners of a building at the corner of Sterlingworth and Ghent streets to have the structure removed.

“We have discussed cleaning up the property and the owners are willing to work with us to take the building down,” Windsor Town Administrator Allen Castelloe said. “The problem we have run into is there are several different owners and one of them may include a bank mortgage (on the property).”

The administrator suggested working to identify each owner and have them sign a release to have the building torn down.

Castelloe said the building, which has been used for both residential and commercial purposes in the past, has a tax value of only $300.

“It shouldn’t be a big issue unless one of the owners doesn’t know about it,” he added. “It may cost a little money, but it’s worth it to get it cleaned up.”

Commissioner Joe Alexander agreed, saying he thought the building was an “eyesore.”

Commissioners agreed the cost was worth the benefit in getting the town cleaned up.

Commissioner Bob Brown said he would like to see another structure addressed.

“While we’re on the subject, the building on Sutton Street has been the subject of some complaints,” Brown said.

The building, which is the old ice company, had been the source of complaints to Commissioner Collins Cooper as well.

“The building is in bad shape and I have received several complaints, including some that illegal activity was going on there,” Cooper said.

Mayor Jimmy Hoggard said the facility had been a hang-out for “winos” in the past and Cooper said that was still the case.

“We need to look into that,” Brown suggested.

Mayor Hoggard said those who were spending time there were “generally harmless,” but agreed it could cause a problem.

The board agreed to let Castelloe have time to investigate the situation and come back with more information.