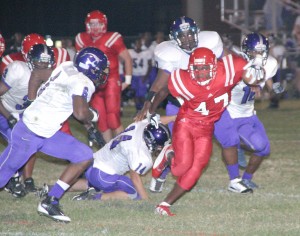 GATESVILLE – Any football coach will tell his team to take what the other team gives you.

For Coach Biggy and the ‘Barons, it marked their third consecutive win after dropping a heartbreaking one-point setback (21-20) in their season opener back on Aug. 20 in Ahoskie.

Over one stretch of the contest, the Red Barons defense came-up with six consecutive turnovers – four fumbles, an interception and a blocked punt. Gates County’s offense scored after each of those South Creek miscues.

As things turned out, Gates County only needed the touchdown they produced on the game’s opening drive. Taking over at midfield, the ‘Barons used only four plays to strike paydirt. DaShawn Stokley performed the scoring honors on a 27-yard scamper. The PAT kick failed, leaving GCHS with a quick 6-0 lead with the game less than two minutes old.

South Creek (the old Roanoke High School in Martin County) got one first down on their initial possession of the game, but lost a fumble at the GCHS 48, recovered by ‘Barons defender Zach Badgett.

Six plays later, Brandall Riddick broke loose on a 17-yard TD run. Stokley added the conversion run as the ‘Barons led 14-0 at the 7:16 mark of the opening period.

Gates County put the game on ice by scoring three times in the second quarter, each after a South Creek miscue, and led 35-0 at intermission.

Emmanuel Knight bulled in from five yards out to open the second quarter offensive onslaught. That came on a 41-yard drive set-up by another fumble recovery by Badgett.

Gates County’s next two scores came via the airwaves on TD passes from Graham Hobbs covering 30 yards (to Jeremy Smith) and 11 yards to Trebor Buck. Both touchdowns came on the heels of South Creek turnovers – an interception by Corey Smith and a fumble recovery by Beau Williams.

The Red Barons padded their lead to 47-0 by scoring twice in the third quarter, again set-up by South Creek mistakes deep inside Cougars territory.

On South Creek’s next possession, Williams broke through and blocked a punt, recovered by Derek Hillock at the Cougars 20 yardline. From there, Knight took the first down handoff and ran over two defenders on a 20-yard run to paydirt.

Knight rounded out the scoring with a 40-yard TD run just past the midway mark of the fourth quarter.

Gates County (3-1 overall) are at home next Friday (Sept. 17) where they play non-conference rival Edenton-Holmes.