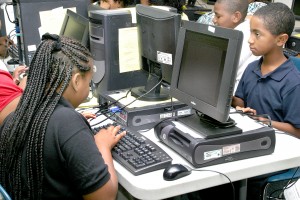 AHOSKIE – For over 50 Ahoskie Elementary School students a brand new way to enhance their education now rests at their fingertips.

Last week, the Kramden Institute of Durham presented in excess of 50 refurbished computers to AES students and their families. The computers come complete with technical support at no charge.

The students were nominated by a school representative to receive a computer based on Kramden’s award criteria of being a hardworking student in grades 3-12 and not having a working computer in their home.

“The Kramden Institute collects, refurbishes and donates PCs (personal computers) to kids who cannot afford a home computer,” said Carrie Clark of Raleigh who serves as Director of Operations for Kramden Institute, Inc.

Clark has a connection to Ahoskie. It was the home of her grandmother, Mae Odom Newsome, now a resident of Jacksonville, Fla.

In an effort to bridge the digital divide, the Kramden Institute has, to date, given out over 6,400 PCs.

“We thought this was a neat project, to rebuild computers to fill the gap families have (for this type of equipment),” Clark told the students. “That’s why your name arrived at our office because your principal, your teacher, thought you are doing something good in school and this would be a great, motivating tool for advancing your education.”

Clark said the computers were donated by businesses and private individuals, part of Kramden’s vision of, “Inspire, Encourage, Educate, Recycle.”

“They’re all different in look, but they all serve the same purpose,” Clark said. “These are for you, the students, to use; they’re for your parents to use; your brothers, sisters; anyone in your household.”

With each group, Clark went over the basic applications of the computers. She said each unit was programmed for high-speed Internet accessibility. However, that service is to be paid for by the individual families and she encouraged them to find an Internet provider with affordable rates for the high-speed service.

She said each computer was loaded with Microsoft Security Essentials, an anti-virus program. Clark encouraged the new owners to steer clear of certain Internet sites, especially those offering free music downloads, in order to protect the computer from viruses.

Clark demonstrated a few of the simple programs installed on the computer, including Open Office, an application similar to Microsoft Office (Word, Excel, Powerpoint). She said the Open Office program can assist students in completing homework assignments.

Following Clark’s in-house tutorial session, each student, assisted by a parent or grandparent who also sat in on the demonstration, carefully disassembled the equipment and proudly carried it home. There, the door will open to worldwide knowledge, better preparing these students as their education process advances.

“We are extremely appreciative for the efforts of the Kramden Institute as they have taken a keen interest in seeing that our students have the tools to not only succeed in the classroom, but succeed in life as well,” Ahoskie Elementary Principal Stan Warren said. “What a great way to start off our new school year. This only adds to the great year we experienced in 2009-10.”

Kramden Institute began in 2003 as a father-son project in a basement in Durham and now has the support of over 3,000 volunteers, generous donors, and thousands of corporate and personal equipment donations. It is a 501(c)(3) not-for-profit charitable institution whose mission is to empower hardworking, less-advantaged students by giving them home computers, allowing them to bridge the digital divide and advance their achievement, strengthening their contribution to the community.

“We encourage community members to support our program so that we may continue our efforts to bridge the digital divide,” Clark concluded.

To learn more about supporting the efforts of the Kramden Institute, visit www.kramden.org.