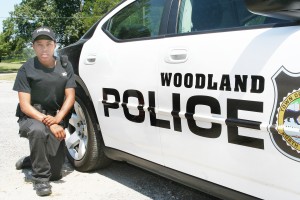 Clarice Hagbourne kneels beside a Woodland Police Department vehicle after joining those ranks as a part-time officer. A native of Connecticut and now residing in Ahoskie, she joined the Woodland PD on July 23 after completing Basic Law Enforcement Training at Halifax Community College. Photo by Amanda VanDerBroek

The same saying could be applied to Clarice Hagbourne, the new part-time officer at the Woodland Police Department.

Hagbourne of Ahoskie only stands five feet, two inches tall, but like any rookie officer she’s filled with the keenness and determination for getting the job done.

“They think they can take advantage of me—look at my height, weight and size and think, ‘Please, she ain’t going to do nothing’,” she said. “But I do surprise them.”

Originally from Connecticut, Hagbourne, 26, has lived in Ahoskie for the past 15 years. She is a graduate of Hertford County High School and is the daughter of Rita McSpadden and Keith Fennell of Ahoskie. She also is a single parent to a five year old son, Javon Maurice Leary.

“I’m trying to be a role model for my son and hopefully he’ll do right,” she said.

Hagbourne said being a law enforcement officer has always been a dream of hers since she was a child.

“I thank him for his trust in me and believing in me when others sometimes judged me for the baggy clothes I wore, and thought I was a trouble maker,” she said. “I always looked at him as my big brother, so I knew I would learn a lot from him and benefit greatly from his talent, wisdom and experience.”

Hagbourne later decided not to continue with college.
“I figured it wasn’t for me,” she said.

“The academy covers the basics of being a law enforcement officer, but you actually get more training when you get out and get a job,” she said.

While at the academy she met Woodland Police Chief Jesse Stevens who was dropping off an application for a part-time officer. Hagbourne applied for the position. Her first day on the job was July 23.

Since her start date, Hagbourne has been undergoing a 12-week field training period under the supervision of WPD Officer Chris Boden.

“We’re excited to have her on board,” said Chief Stevens. “She’s progressing very well and adapting to our system of work.”

Stevens added Hagbourne is nearing the completion of that training program and will soon begin to patrol on her own.

“It’s been an adventure, it really has…it’s been wild,” Hagbourne said about her new job. “I learn something new every day.”

She said she’s looking forward to getting out on her own and meeting and making contacts with those within the community. Hagbourne has issued traffic and speeding citations during her first month on the beat and says there have been some who have thanked her for doing her job.

“I try to show them some respect,” she said. “I show some to them, so maybe they’ll give it back to me.”

Hagbourne is one of three new part-time officers at the department. Virginia Powell and Jonathan Jenkins work at WPD when they’re off from their full time jobs as Northampton County Sheriff’s deputies. Stevens said including the three part-time officers, his department now boasts five officers—the most WPD has ever had.

While Hagbourne is still finding the highs and lows of law enforcement, one television show has been completely ruined for her because of her new job.

“I used to watch “Cops” a lot back in the day, but now I can’t even watch it because I see a lot of mistakes,” she said.